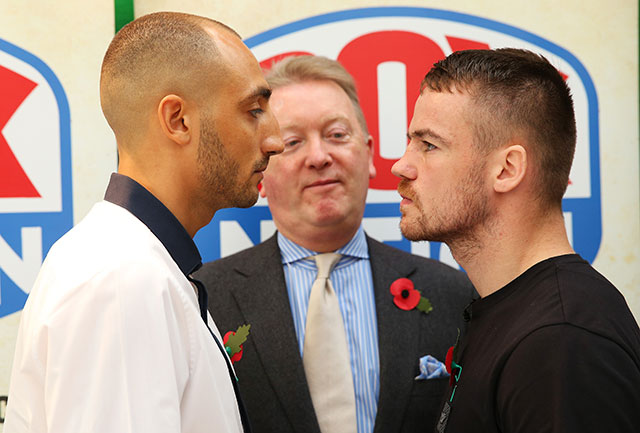 FRANKIE GAVIN believes he will expose Bradley Skeete when they clash at the ExCel Arena on November 22. The British welterweight champion, who on Friday night halted mismatched Mate Hornyak at the same Wolverhampton Civic Hall that hosted his August loss to Leonard Bundu, claimed that Skeete did not entertain the thought of fighting him until very recently.

“I know deep down they don’t want it,” Gavin said at the London press conference to announce the latest addition to the Tyson Fury-Dereck Chisora card. “You ain’t boxed anyone yet.”

Skeete, who sparred Gavin while they were amateurs, admitted the fight would have come too soon 12 months ago.

“The fight was offered to me a year ago,” he explained. “I wasn’t ready then. I am now. I had other options, I didn’t have to take this fight. If I didn’t want it then I would not be wasting everyone’s time by sitting here.”

Promoter Frank Warren is hopeful the winner of this BBBofC ordered contest will land a high ranking with the WBO, and secure a world title fight in 2015. Gavin is aware he could already be at that level with Bundu challenging WBA Interim titlist Keith Thurman on December 13 in Las Vegas.

“I thought I won that [Bundu] fight,” said Gavin of the tight 12-rounder that blotted his perfect record. “I didn’t feel like a loser. But I’m back now and it was good to fight [on Friday]. I didn’t need to, and the opposition wasn’t the best, but I felt great in there.”

Skeete accepted Gavin was unlucky to lose to Bundu.

“It was a very close fight but he lost,” said the 27-year-old challenger. “That’s why I’m sitting here now. He tried to step up and failed. Now it’s my turn to step up and that’s what I’ll do.”

Warren – who on Friday was awarded £50,000 and additional damages after a libel case against Ricky Burns’ manager Alex Morrison – has applied for additional seating at the ExCel due to the demand for tickets.