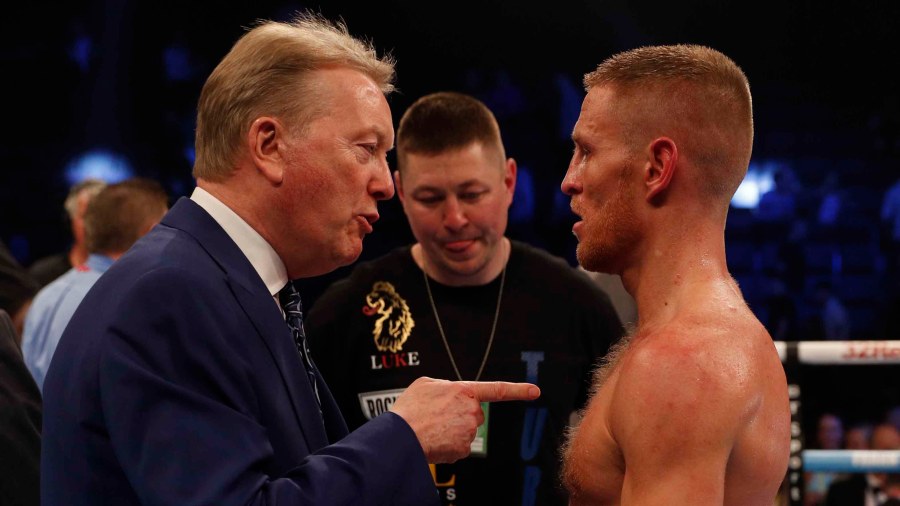 PROMOTER Frank Warren expects to make a rematch between Liam Smith and Liam Williams after the controversial conclusion to their bout, an exciting fight, at the Manchester Arena on Saturday (April 8).

“I’m sure it will make a good rematch on the strength of that,” Warren told Boxing News.

Overall he was delighted with his latest show, which opened the promoter’s new deal with BT Sport. “I think it’s a significant night for boxing in as much that there’s now competition between the two big TV players. This show we did really well with tickets considering that it wasn’t a date we really wanted to go on, the Grand National’s on, Augusta’s on and because this was the date we could get to promote here we had to come in a couple of weeks after the [Anthony] Crolla fight which was announced a good six, seven weeks before ours so it took a lot of money out of the market. That being said, they were good fights and they fought well,” Frank continued.

“I know it’s a cliché about the new era but it is a new era. From my point of view, I’ve really got the bit between my teeth to go out now and make some bigger and better shows. We’re in a position to do that because we’ve got a bigger audience, that means we’ve got more cash to come in for us to invest in bigger fights. So we’ll be doing that. We’ve got some good fights, some good shows coming up. We’ve got a couple of new guys that are going to sign with us that we’ll hopefully announce in the next couple of weeks… One’s quite established and hopefully we get that over the line. We’ve got some good things happening. It’s a bit like the old days. When Ricky Hatton started out with me, people think we sold out all the time and we didn’t. It took a long time to sell out this [the Manchester Arena]. In fact we never sold out until we fought Kostya Tszyu. With Terry [Flanagan] we’ve got a chance of doing the same thing. He’s got a couple of habits I don’t like, looking down when he goes back to corner [looking frustrated] when it’s not gone wrong… I think the crowd are really going to take to him. He’s a hard fighter and hopefully he’s going to be part of the long term with BT.”