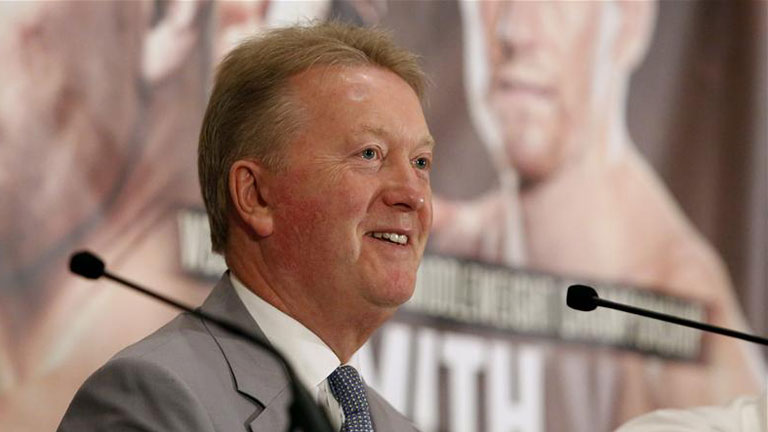 This interview was previously published in Boxing News magazine

How important was it for you to deliver Canelo Alvarez for Liam Smith?

It is important. Listen, invariably, fights are not difficult to make if the fighters want to fight. You get a lot of people talking about things – like this Chris Eubank Jnr [vs Billy Joe Saunders II] thing, and we all know what a nutter his father is – you talk about it, you get to a deal, and they didn’t want it. In the end, we lost the will to live. But with Liam, he wants to fight the best, he’s only a young guy and he’s one of those guys I believe rises to the occasion. I believe he’s the best fighter out of the Smith brothers, I’ve always said that – he’s a much better fighter than people give him credit for, he can punch, he can box. I think Alvarez is excellent, but beatable. One thing’s for sure, unlike Amir [Khan] going into that fight [with Canelo], Liam is a natural super-welterweight and he can punch. Amir couldn’t really punch at his own level, so he wasn’t going to be taking up any power to fight Alvarez.

If you were still guiding Khan, would you have advised him not to take the Canelo fight?

No, he’s at the stage of his career where he’s at and it was a money fight for him. The one thing you can say about Amir is that he’s never ducked anyone. You might say he didn’t fight Kell Brook, well no he didn’t, he fought someone better. You can’t criticise Amir for that.

Were you actively chasing Alvarez for Smith?

Yes, we wanted the fight before Amir got it and we thought we had it done. But it went by the wayside with one thing and another. We originally thought we could get him for Billy Joe, then we were negotiating with [Gennady] Golovkin – that fell through – but here we are now. We’ve got the fight. I’m just p***ed off that the [Tyson] Fury-[Wladimir] Klitschko rematch has been postponed, because we were on the brink of breaking some big news on that, about how people watch BoxNation, but I can’t go into that now.

How close was Billy Joe to fighting Golovkin in the summer?

It was close, but then the summer thing was out because of Bill being injured. After that it became a little bit difficult with the finances of it. But Bill [is looking] to fight the winner of Smith-Alvarez.

How has Billy Joe been with the inactivity?

He’s been p***ed off. He’s been training hard, it’s been frustrating. He’s wasted a lot of time on the Eubank rematch, he got injured. He doesn’t want to hear about Eubank anymore, it’s hard work. But this is boxing, we all know what this game is like. But we’ve got a plan for him.

Do you feel he’s been overlooked with all the talk of Golovkin-Alvarez and now Eubank?

I understand it. They’re both huge names and let’s be honest, Bill has only just won his world title and he hasn’t defended it yet. Golovkin and Alvarez have been in big fights, they’re significant fighters. What annoys me is Eubank. He had the Interim title, he could have fought [Danny] Jacobs. He could have fought Saunders, and all we keep hearing is that he wants to fight everybody. The old man [Eubank Snr] is milking it.

What do you make of Anthony Joshua?

He’s got to step up now. He got presented with the belt after what the IBF did to Tyson, which was a shame for Tyson in many ways. But one man’s bad luck becomes some else’s good luck. That was a good move [from Matchroom] to go and get Charles Martin, who was the worst heavyweight champion I’ve seen in recent years, but he did what he had to do. But you can’t keep doing that, you can’t keep milking it. It reminds me a little bit of what Matchroom did many years ago with Chris Eubank [Snr], when they put him on a ‘world’ tour and they were all s**t fights. They’re now charging pay-per-view for Joshua, which they have to, I understand that, because of what Joshua earns, but now he’s got to start stepping up to the plate. The fights that should be made are against Fury, or Klitschko if he wins, or David Haye. Nothing less than that. Look at Fury, he didn’t have to give Klitschko a rematch, but he has, the top two guys in the world. Fury has never shied away from anybody. Fury will fight anyone, a bit like Dereck Chisora, but the difference is he wins the fight.

How do you rate Haye’s comeback so far?

After three years out he’s entitled to a couple of knockovers. Shannon Briggs is another one. It’s all part of the script, but he’ll have to step up to the plate, and I think he will do. What I will say about Haye, from working with him in the past, if he fancies a job, then he fancies it, and he fancies a fight with Anthony Joshua. He fancies that like he fancied a fight with Chisora, Enzo [Maccarinelli], and that’s where his head is. I fancy him to beat Joshua too. Don’t get me wrong, I’m Joshua’s biggest fan, I wanted to sign him. But I was very disappointed with his performance against Dillian Whyte. Look, Dillian’s a nice bloke and all that, but he’s not world level is he? And he gave Joshua a real tough fight and I thought coming out of that fight there were a lot more questions than there were answers, I was quite shocked. I know that if Joshua hits you on the chin, he’ll knock you out. But he’s got that habit where he’ll drop his hands, and there are stories about him being hurt badly in sparring. He’s there to be done, and I’d pick Haye to beat him. And Tyson definitely beats him. I like Joshua but I see chinks, and if one of my guys was fighting him, I’d know a way to beat him.

Five years from inception, has BoxNation been a success?

Yes. It’s going really well and we’re on the brink of announcing something really big – which we would have done if Fury-Klitschko II hadn’t been postponed. People didn’t think the station would last five minutes and here we are. People think we’re dinosaurs, but we’re innovative, we’ve gone and done our own thing. We’ve created our own channel and we’re bringing the best fights from around the world. Look at the world titles and the big-name fighters we’ve put on the channel, and brought to the British public. That’s what we’ve been doing – we’ve changed our business. Domestically, we continue to build champions.