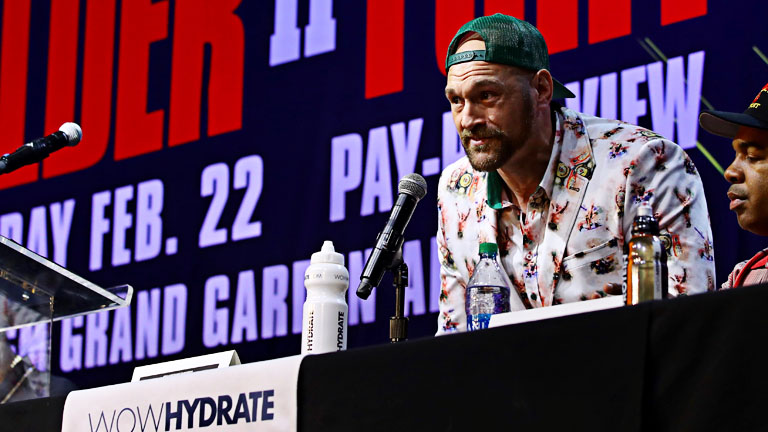 FRANK WARREN has accused rival promoter Eddie Hearn of having ‘his nose pressed against the window’ after he recently suggested that Tyson Fury’s training camp for the Deontay Wilder rematch has not run smoothly.

Warren – Fury’s UK promoter – rolled his eyes when Boxing News asked him about Hearn’s comments and insisted that Tyson, who challenges for the WBC heavyweight title, is in the shape of his life. The loser of the return has 30 days to trigger the clause in the contract for a third bout but Warren is keen on an all-British showdown with Anthony Joshua, who holds the IBF, WBO and WBA belts and is, of course, promoted by Eddie Hearn.

“You’ve only got to look at Tyson,” Warren told BN. “Mentally he’s well, physically he’s well. I’ve spent a lot of time with him and he’s in a very good place. It’s Hearn isn’t it. He’s always got something to say about somebody else’s shows, he can’t help it.

“It’s funny how the world changes. Not so long ago we’re being told that if Fury fights Anthony Joshua, he only gets 25 per cent of the purse but now they’d love to do 50-50, if they can do the fight. That’s how the world moves. Joshua got badly exposed by Andy Ruiz in New York, he done brilliantly in the rematch.

“He was disciplined and smart but he fought a guy who trained in a larder, he looked like he was wading through custard. That’s nothing to do with Joshua, he did what he had to do, but now he finds himself in the slipstream of Fury and Wilder. They’re numbers one and two, I don’t care what anyone says.

“I want to see the winner face Joshua, by the way, that’s the way it should be. But some of the gold has come off Hearn’s golden goose and, like he always does when he’s not involved, he’s got his nose pressed against the window, looking in and making stupid comments.”

Irrespective of Hearn’s comment, the foundation of which is unknown, Fury’s decision to change trainers before this crucial fight – Kronk’s SugarHill Steward coming in for Ben Davison – raised eyebrows. Warren admits it was a surprise, but he backed Fury’s decision.

“Tyson’s a boxing scholar,” Warren explained. “Nobody is going to teach him how to box. When Ben was appointed, everyone said, ‘Who’s Ben?’ Nobody knew who he was. I knew who he was. He was good as a trainer and he was good outside the ring when Tyson was going through his problems. It was a good relationship.

“He’s picked SugarHill who he’s worked with before. Who am I to tell him otherwise? Tyson is not an idiot, he’s not a fool, he knows what he has to do. This guy has worked corners, he’s worked corners when fighters have been in trouble, he has loads of experience and he’s got Andy Lee in there. It’s a great team.

“But did I like to see him split up with Ben? No I didn’t, but he couldn’t have both of them working together. That just wouldn’t have worked.

“He plucked Ben out of nowhere, it proved to be the right decision, and he’s doing the same with this fella.”

Warren masterminded the making of the first Wilder-Fury contest that ended in a controversial draw in December 2018. The promoter insists that contest, when Fury hauled himself off the canvas twice after appearing to dominate for long periods, should tell us all we need to know about the outcome of part two.

“I look at the fight and I think, ‘What can Wilder do that’s different to the first fight?’ He’s going to try and land more shots, and knock him out,” Warren said. “He’s not going to outbox Tyson Fury is he? He’s short of options but Tyson has plenty. He can box orthodox or southpaw, he can box on the front foot or the back foot. He can punch.

“Everybody keeps talking about getting up in the last round of the first fight – which was quite a feat – but what they forget is what he did when he got up off the canvas. He took the fight to Wilder. They’ve been showing the clip of the knockdown over and over, it’s really annoyed me, what they should do is show what happened afterwards. He landed a left hook and wobbled Wilder. By the end of the round he was hanging on. If there had been another 20 seconds, he might have stopped him.

“He can hurt Wilder, he can stop him, he’s taken Wilder’s best shots. Of course, we don’t want to see him go down again and Wilder is very dangerous. He’s a phenomenal puncher, he’s unorthodox in that regard. He’s been behind in many fights and come back to win, but the fighters he’s beaten are not Tyson Fury.”

It was Warren’s intention to make an immediate rematch before Top Rank swooped and delivered a highly lucrative contract to Fury. In the 14 months that have elapsed since they went to war in Los Angeles, Wilder has knocked out Dominic Breazeale in one round and Luis Ortiz in seven (after losing the first six). Fury, after a two-round blowout of the mismatched Tom Schwarz, went 12 gruelling rounds with Otto Wallin, getting badly cut in the process. For some observers, Fury’s struggle with Wallin is evidence that he will come up short against Wilder.

“We were trying to make the rematch immediately but then this deal with Top Rank came up,” Warren admitted. “But I still believe he wins the return. What has happened since the first fight? In his last fight against Luis Ortiz, Wilder got his head bust up. In Tyson’s last fight he got a terrible, terrible cut. The only worry was, and not being disrespectful to Otto Wallin, that the referee was going to stop it. Tyson got through that, it again showed you what he’s about. Even with a cut, he showed he’s got great self-preservation, he’s got a great fighting heart.

“Look at their ages. Wilder is 34 and Fury is 31, Wilder is the older guy, people forget that. Tyson hasn’t had a lot of hard fights. It’s not like it was a war with Wallin, he wasn’t getting beat up or anything. He hasn’t got a lot of miles on the clock.

“I’m big about seizing the moment when the moment is right. That’s why we made the first Wilder fight. It wasn’t for the money, it was because I thought, and Tyson thought, he could win. That’s what Tyson Fury is all about.”