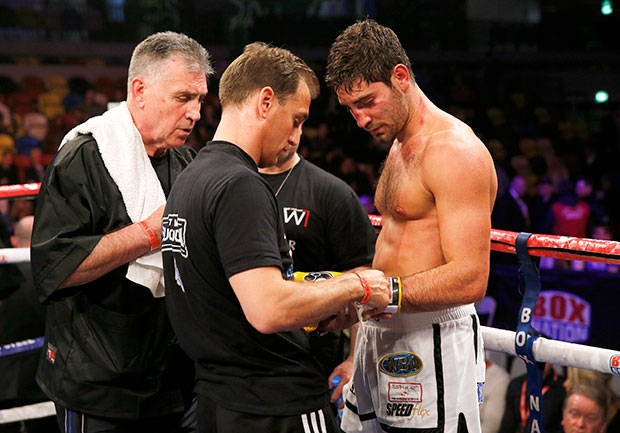 The sixth round stoppage loss highlighted a few flaws that needed correcting yet might not have been identified against less taxing, less stubborn opposition.

The 25-year-old ticket seller jumped straight back on his horse and has been relaying foundations under top coach Mark Tibbs at the TKO Gym in Canning Town.

This Wednesday evening, he returns in a Southern Area title clash with Titchfield’s Sam Couzens at The York Hall, Bethnal Green and is adamant that he’ll be back to the explosive form that saw him romp to  12 straight wins (nine by stoppage) and a world rating with the WBO.

The ‘Wise Guy’ was in surprisingly buoyant form when boxing writer Glynn Evans caught up with him on Saturday afternoon.

With three months to reflect, how do up explain the sixth round stoppage loss to Sergey Khomitsky at the Copper Box last time you were out. The Belarusian is clearly far better than his record suggests but, despite entering a heavy favourite, you appeared very flat.

Sergey definitely performed very well. He’s no mug; he’s Felix Sturm’s chief sparring partner and arrived in tip top shape. He’s a quality fighter who gave Martin Murray a very close fight. Some even felt he beat Martin. He used his experience well to hold and negate me and eventually put me on the back foot.

But I got my tactics terribly wrong. I should’ve ‘put it on him’ a lot earlier. In the build up, we knew my defence needed working on but it got to a stage in the fight where, because of that, I was neglecting my own strengths; coming forwards, being aggressive, throwing my own hard shots whilst maintaining a calm head.  I became pre-occupied with getting the defensive side right, to the detriment of imposing my natural game.

It wasn’t my night and Mark Tibbs showed what I fantastic corner man he is by pulling me out and allowing me to walk back to my corner rather than get carried back, later on. This was just a development fight, not a title match-up.

Were there any positives that you were able to take from the defeat?

Absolutely. Long term, this will have done me the world of good. I learnt big time from it and found out what still needs addressing to elevate me to the next level.

For a start, it’s completely changed my mind set. I had two choices. I could bury my head in the sand and feel sorry for myself or comeback bigger, stronger, more powerful. I was back training at the gym just two or three days later. I was soon back running six miles a day and running far faster than before. I’ve been training exceptionally hard and my body has reacted well to that.

Trust me, the Khomitsky fight has made me more confident. I now know I can take a hard shot. I learnt that, when clipped, I need to hold not fire back.

Your rise through the ranks had generated a lot of media attention. Might the loss of your unbeaten record relieve a bit of pressure and allow you to develop at a more natural pace?

Probably. Domestic rivals who’d previously been ducking me prior to the Khomitsky fight, guys like Lee Markham and Kelvin Young, are suddenly getting confident and starting to show a bit of interest, calling me out. Guys like Callum Smith and Rocky Fielding probably feel a bit more confident about meeting me now. They’re fights I’d still jump at with both hands, sooner rather than later.

You’ve a huge fan base. Was it difficult to face people after the defeat? To what extent will you need to rebuild your support?

It wasn’t at all difficult. In many ways the defeat done me a favour because it sifted the real loyal supporters from those who were just hangers on, riding the wave of all of my publicity. If it’s narrowed my support down to just the really loyal ones, that’s no bad thing. I now know who’s really here for me.

But my fans are largely a good bunch and they’ve stayed loyal. I’ve sold over 400 tickets for my comeback which is a pretty good response for a Wednesday night at the York Hall. I’ve a lot of gratitude for them.

You must have been hugely disappointed by the defeat. How long were you down for? Who helped you to get over the defeat?

I really weren’t down for long. In fact, as soon as I was back in the dressing room getting stitched up, I couldn’t wait to fight Khomitsky again.I knew immediately this was nowhere near the end for me.My team has become far more tight knit. There’s just a few people whose advice I listen to such as Mark Tibbs, Frank Warren and my dad. The rest of the criticism just goes over my head; water off a ducks back.

How far time wise, has the Khomitsky defeat put you back?

I really don’t think that it has. It was one step back and two steps forward. Perhaps it was a hard fight a bit too soon but I still could’ve won it with the right mindset on the night.

How big was the temptation to go straight back into a return with Khomitsky?

Very big. I can’t wait to get my hands on him and put right what went wrong. But this route is better. The pressure is off.

What specifically needed addressing once you returned to the gym? What can fans expect to see from Frank Buglioni on Wednesday night that they’ve not seen before?

Better defence and head movement. We work on that religiously anyway but previously I was trying too hard with it, which resulted in me getting caught and becoming frustrated. But it’s all gradually falling into place and becoming far more natural which is what I need. Instinct is quicker than thinking.

To be honest, you’ll not see too much different on Wednesday because the Couzens’ fight will be all over in a couple of rounds. Fans are in for a short display. This is the most aggressive mindset and best physical condition that I’ve ever entered a fight with.

Were you ‘gun shy’ at all when you resumed sparring?

Nah, not at all. The Khomitsky fight just convinced me that me chin has never been better. I was never stopped in the amateurs and that last fight proved I can take a real hard whack with the small gloves on.

I’ve had some quality sparring with a German middleweight called Arthur Hermann who’s won 11 straight with 10 stoppages, plus Tom Baker and a couple of sharp amateurs. I’m very confident in my resistance and condition.

What have you been able to find out about Wednesday’s opponent Sam Couzens from Hampshire. What problems might he present?

I’ve done a lot of research on him. He’s tall and a tough, strong boy but I think it’ll only be a matter of time. If he tries to box me at range, it’ll be a very short night’s work. If he comes in close and attempts to smother and spoil, he might last a little bit longer but it’ll be far more painful for him!

What is Frank Buglioni hoping to get from Wednesday’s fight and what are your intentions for the remainder of 2014?

I just want to shake off the rust and send out a message that Frank Buglioni is back. I leave the rest to Mark Tibbs and Frank Warren. I’ll definitely be training hard throughout the remainder of the year, ticking over.

Ultimately, I intend to be the best in the division. I certainly feel ready for a fight with someone like Rocky Fielding but the longer that goes before I get a 12-round title fight, the more I’ll improve. I’m in no hurry.