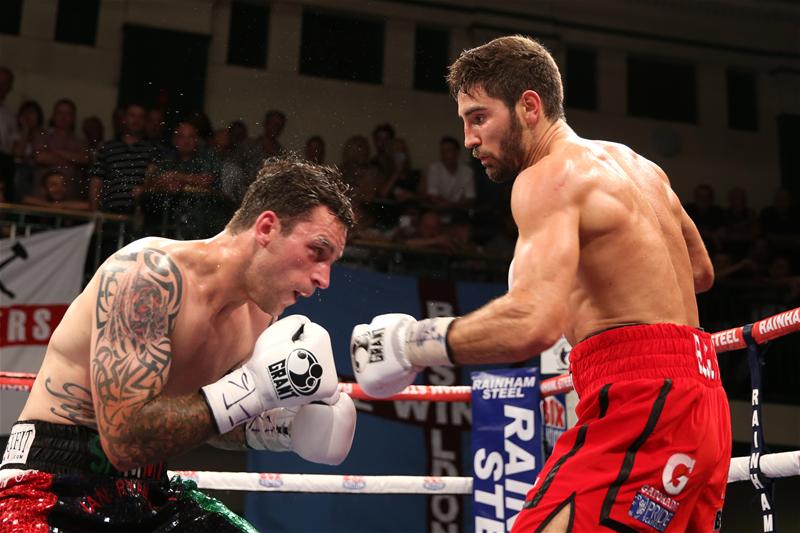 Frank Buglioni has developed over his professional apprenticeship and is now preparing for his first 12-rounder, writes John Dennen

IT’S BEEN a process. Frank Buglioni has followed the well-trodden route for a new pro with good potential. He began his professional boxing career with four-round contests. Stepping up to six-threes after his first three bouts, he did his first eightrounder this year and is now preparing for a scheduled 12 rounds at the Copper Box on November 30.

His training reflects that development. Five or six days a week, he has two sessions a day, usually in the gym in the morning and running in the evening. As his upcoming bouts have grown in distance, the number of rounds he’s sparring has also increased. “I tend to use two or three sparring partners at a time so I can get the rounds out but still at a high-quality pace. As the weeks go on and my training becomes more and more intense, I’ve been finding the rounds a lot easier,” Buglioni said. “So I know my fitness is getting better and better and my sharpness is really starting to find the targets now.”

Having turned pro just over two years ago, Buglioni is 10-0 (7). “It takes a while but we’ve built it up over time,” he continued. “At the end of last year we were doing eight and 10-round spars, we’veincreased that this year and it feels like it’s the right time.”

“In my gym sessions, it’s a mixture of sparring, pads, shadow-boxing and strength,” says Buglioni. “Every now and then we’ll do a lone strength session or a nice circuit.

“I’m probably in the gym for at least two hours. That’ll consist of having a decent warm-up, where I’ll be doing some footwork drills and quite a few exercises that increase power and speed of footwork. I’ll do them to start with and then I’ll move on to shadow-boxing where we’ll be working on different techniques, tempos, different shots, maybe six rounds of shadow usually. Then I’ll go on to various bags or I’ll spar or I’ll do padwork. Mark [Tibbs, his trainer] tends mix it up as well. Sometimes it’ll be padwork in between bag sessions and I’ll probably end up doing 10 rounds of either padwork, bagwork or sparring and maybe cool down with some more rounds of shadow.

“If I had to prepare for a fight and I was only allowed to do two things, it would be running and sparring. They’re the two most important things but obviously padwork and shadow-boxing, they both play their part so you can do the right things and work on certain techniques.”

“You need to be strong all over as a fighter. I wouldn’t go too heavy with the weights, maybe aim for 12 to 15 reps, where you just about get them out but maintain technique. The weight depends on the individual,” said Buglioni.

“Anything from six-to-eight [exercises], maybe three lower-body, three upper-body and a couple of either full-body or core exercises.”

“A full-body exercise would be burpee jumps, maybe with a press-up. With the bar, power clean and jerk, clean and press or a squat and press. Step-ups, you can add a curl and shoulder press as well.

“You want to include your core and twisting exercises as well, which you can do with medicine balls. You don’t want to do standard sit-ups, you want to replicate twisting when you’re punching. Always balance that out with your lower-back exercises as well.

“[For the legs] we’ll do bodyweight squats, squat jumps or tuck jumps and then squats with the barbell, lunges, lunges with dumbbells. Your legs are very important to keep strong.”

“The runs, they differ obviously,” Frank explained. “At the beginning of the camp I tend to run seven or eight miles at a time and as I get closer and closer to the fight I start dropping them down to sixes, fives, fours and obviously start including the sprints.

“We use hill sprints a couple of times a week, and that’ll be maybe the last four or five weeks of a camp. The reps vary depending on how far away we are from the fight. It’s all very much tapered. Mark is very good at adjusting the reps and the distances for if I’ve had heavy sparring or if I’ve got a hard week coming up, he’ll manage that accordingly.”

“Ladders are perfect but it’s all pretty uch attitude and your mental state. I’d be thinking, ‘Fast hands’, but I wouldn’t be thinking, ‘Fast feet’. I’d tend to leave my feet behind and sometimes over-extend and lean over my front foot. Now I’m thinking, ‘Do everything fast’ and you condition yourself.”

“With the guidance of Mark and his experience, I’ve listened to him and I’ve made big improvements. The [Kirill] Psonko fight, that was a bit of a poor performance from myself. We looked at things I was doing wrong and made a conscious effort to rectify it and it’s paid off,” Buglioni said.

“I was impatient and a bit immature, trying to chase the knockout and only worrying about what shots I’m throwing rather than worrying about what’s coming back. We had that in mind when I was doing my training, so I’m boxing on the front foot and on the back foot now. I’m dangerous when I’m going back and taking shots rather than being content to come forward.

“I’m thinking about their shots, coming back with counters and trying to slip and move, make it awkward for them as well. “I’ll be boxing systematically, everything off the jab, back and forward.”