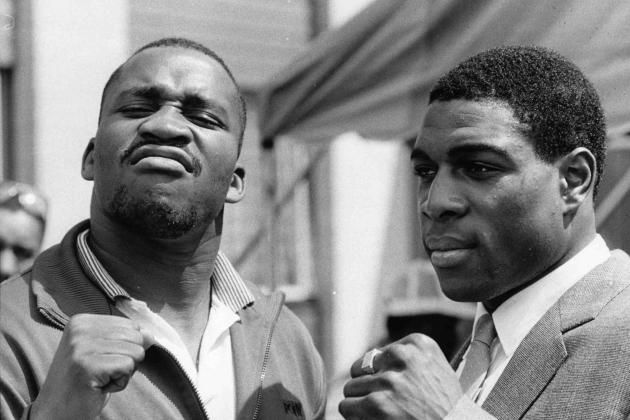 SUMMER is traditionally quiet for professional boxing in the UK. The last pro show here was in Wolverhampton on the first of the month, when Frankie Gavin lost narrowly to Leonard Bundu for the European welterweight title – and the next won’t be until September 6, when Carl Frampton challenges previous victim Kiko Martinez for the IBF super-bantam crown in Belfast. That’s a 36-day gap.

The feeling is that fans won’t want to be inside a hot, cramped building during the summer months (even though plenty of shows happened in just such conditions in the June and July just gone). Promoters are also discouraged by the long school holidays from late July to early September, which for many families are the only opportunity to get away. No point taking a risk putting on a boxing show when there’s nobody around to see it, goes the reasoning.

Yet there have always been exceptions. In 1986 the appeal of Frank Bruno was such that his WBA heavyweight title challenge against Tim Witherspoon went ahead in the open air at Wembley Stadium as late in the boxing season as July 19. A crowd of 40,000 turned out (including the author of these lines) and saw Big Frank stopped in the 11th round. It was late on a Saturday night, the timing convenient for US television.

Fights in stadiums for outdoor sports have for obvious reasons been limited to the summer months, although given the vagaries of the British weather a July or August night is just as likely to be wet and cold as one in November.

It was on June 20 in 1942 that young gun Freddie Mills knocked out old-stager Len Harvey in two rounds for the British and Empire light-heavyweight titles at Tottenham Hotspur’s White Hart Lane football ground. Despite this being in the middle of World War II, it was a huge domestic fight and no doubt provided a welcome break from military duties for many in attendance.

But not all football-ground fights are of title status. Herol Graham was a former British, Commonwealth and European light-middle champion who was looking to make a splash up at middleweight when he boxed quality American Lindell Holmes at Sheffield United’s Bramall Lane in July 1984. It was a mere 10-rounder, the idea being to see if the Ingle-trained star could hack it at the higher poundage.

Staging the show outdoors in a football ground was a brave move, for Graham had received a fraction of the publicity afforded to fighters blessed with less talent but the good fortune to be based in the South of England. As it turned out, the Alma Ingle promotion attracted a good crowd of 7,000 on a Sunday afternoon and Graham won when Holmes was stopped on a cut eye in round five. The risk paid off both inside and outside the ring.