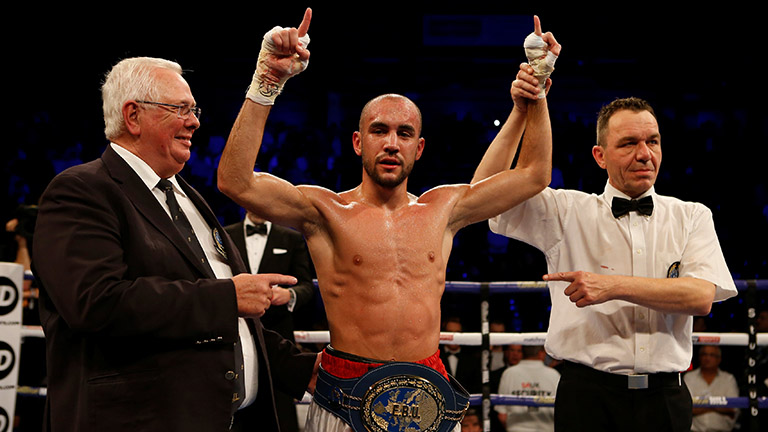 Competing at the Allianz Cloud in Milan, Italy – the homeland of his parents – Belgian Patera engaged in a furious firefight with Hyland in the opener, as the warring lightweights set a frenetic pace. Both men returned to their corners after three minutes sporting cuts – Patera by his right eye and Hyland on his head.

In the second session, a solid short right hook forced Hyland to touch down on the canvas with both gloves, though fortunately for him, the incident occurred right at the end of the frame. Undeterred by his trip to the mat, the gutsy Belfast scrapper continued to march forward in the third and fourth, but Patera was the one connecting with the cleaner punches.

In the fifth, Patera’s punishing body work really started to come into play. Just before the bell sounded to conclude the stanza, he slammed in a left hook to Hyland’s liver which sent the Northern Irishman to the floor. Two more knockdowns awaited the 29-year-old in the sixth, as poisonous left hooks downstairs did the damage once more. Following the second count, referee Jean Robert Laine decided to halt proceedings at 1-15.

The impressive victory marked Patera’s second successful European title defence in what is his second reign as champion. Having taken Lewis Ritson’s ‘0’ in October last year on away turf in Newcastle, the 26-year-old from Genk is developing into a serious player at 135lbs. Promoter Eddie Hearn certainly thinks so. After the bout, the Matchroom Boxing chief said: “Patera is becoming a real threat.” He then went on to talk up a future clash between the EBU king and Cardiff’s unbeaten Joe Cordina, who holds the British and Commonwealth lightweight straps.

Further down the bill, Doncaster’s former IBF bantamweight boss Jamie McDonnell, 33, made his first appearance since being stopped in under two minutes by Japanese “Monster” and pound-for-pound star Naoya Inoue 13 months ago. Weighing in at featherweight, McDonnell shed some rust with a comfortable six-round points win over Spain-based Nicaraguan Cristian Narvaez, 24, who has now lost his last 10 contests in a row.