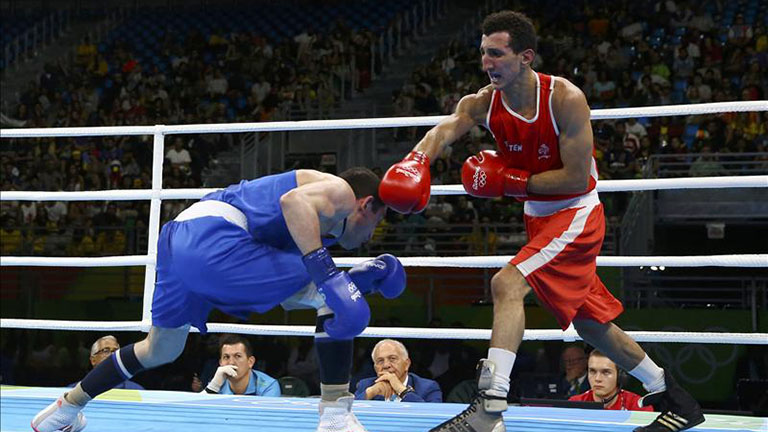 Selimov, now boxing for Azerbaijan, is a wily veteran, who still has quick hands and feet. A former World gold medallist who combines speed with expert skills, he had actually beaten the Frenchman in the final of the European Games last year. Yet Oumiha gave no regard to his reputation or their personal history.

The Frenchman is a tall southpaw but doesn’t try to stay clear of a tear-up, out of range. Instead he uses his long reach as a weapon. He attacked Selimov right from the start, keeping positive and maintaining the tempo of his attack. Throwing clusters of punches, he knocked Albert off balance. He consistently forced Selimov on to the back foot. Whipping across left hand hooks, he landed repeatedly.

Selimov realised he was shipping too many punches and tried to reclaim the ascendancy. It meant instead of using speed and movement, normally so crucial in his approach, he held his ground to try to claw his way back into the contest and fight Oumiha off.

It didn’t work. Even though the Frenchman understandably tired after setting such a ferocious pace, he took a unanimous decision. That performance won him a place in the 60kgs semi-finals and a guaranteed Olympic medal. He will box Mongolia’s Otgondolai Dorjnyambuu on August 14 to determine the colour of that medal.