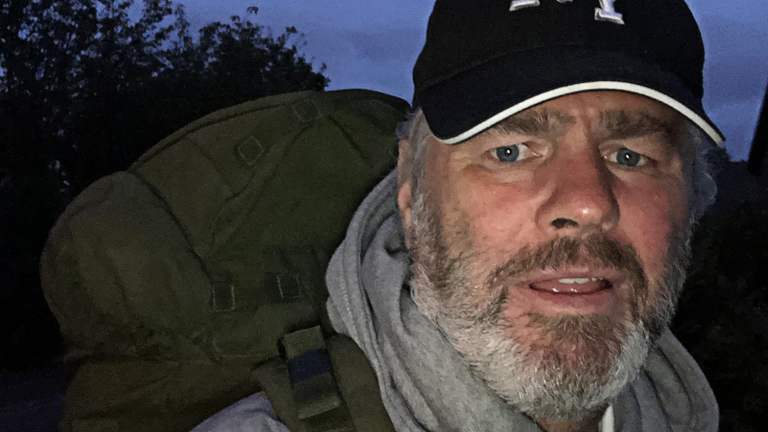 Glenn McCrory draws from his fighting spirit to conquer Mount Manaslu for charity. Despite the harrowing experience, he hasn’t finished yet

HUGE hearted former world cruiserweight king Glenn McCrory is intent on returning to the top of the world, quite literally, next year when he plots to climb Mount Everest to raise funds for a children’s charity.

It’s 30 years now since the 55-year-old Geordie scalped Kenya’s Patrick Lumumba (pts12) to bag the IBF belt amidst delirious scenes at the Louisa Centre, a stone’s throw from his family home in Stanley, County Durham.

And the man who passed 25 years as a Sky Sports boxing analyst, and who also dabbled with acting after drawing the curtain on a highly decorated 30-8-1 ring career in 1993, is deadly serious about his quest, having recently returned from a month-long reconnaissance expedition hauling his 6ft 4in, 17 stone frame up Mount Manaslu in the Nepalese Himalayas.

“Forget facing Lennox Lewis or fighting for world titles, this was easily the hardest thing I’ve done in my life; physically and mentally horrible. It’s the toughest thing I can ever imagine doing,” claims Glenn.

“Last year I scaled Kilimanjaro with a lad in a wheelchair who suffered from Ataxia, the same illness that my brother David died from 23 years ago. But that wasn’t climbing with ropes, nothing to prepare me for this.

“Manaslu is the world’s eighth tallest mountain, higher than any other mountain outside of the Himalayas and I basically spent a month in a snow drift. I was at the back of six other climbers and it was proper climbing. We were constantly abseiling on the ropes. My first set of gloves lasted just one day. Temperatures were minus 26-degrees Celsius. You’d be forced to sleep in cold, wet clothing.

“Every 30 seconds or so you could hear avalanches. There were 15 feet crevices and twice I saw people rescued who’d fallen into them. It was a death zone, quite literally. A lady Polish mountaineer in the next tent to me died. That’s how arduous it was.

“There was a lot of fresh snow which constantly caused you to slip backwards. At times, it was two paces up, two paces back. I had scabs all over myself and my toes are still numb from my feet constantly banging against hidden rocks. I think it was the mental strength that I acquired through my boxing career that helped me to keep going.

“I reached Camp Four which was 7550 metres up – the view was breathtakingly amazing – but unfortunately, we weren’t allowed to go up the last 100 metres for safety reasons

“But I was part of the party of ‘Nims’ Purja MBE, a former Gurkha and Royal Navy Special Forces soldier. ‘Project Possible’ is an initiative for ‘Nims’ to reach the summit of the 14 highest mountains on the planet. Manaslu was the 13th summit ‘Nims’ has reached in just seven months. The fastest anyone had done it before was something like eight years. It’s magnificent to think that I’ve been a small part of his history.

“The ‘Big One’, conquering Everest, is scheduled for next April or May of next year but we have to raise sufficient finances to reflect how perilous it’s going to be. The fundraisers have to do their bit to make it worth it.

“It’s in aid of the Children’s Wish List, a charity which organises a fabulous final holiday for terminally ill children, before they pass away. I became aware of it when my brother Gary’s 16-year-old son Greg succumbed to cancer.

“I’m reaching out to the boxing community – who are notoriously generous – for support with this very worthy cause. I’ve started a Go Fund Me page (Glenn McCrory’s Everest Summit Exhibition) and I’d be extremely grateful to anybody who could help out here.

“I’m all but putting my life on the line. After I’ve done Everest, trust me, that’ll be it. I’ll never want to play in the snow again!”

Glynn Evans boxed as an amateur light-welterweight on the Birmingham and London circuits during the 1980s before moving to the safer side of the ropes in 1990. Now very much a heavyweight, he started with stints at the now defunct <em>Boxing Outlook</em> and <em>Amateur Boxing Scene</em> and has been a regular feature writer for <em>Boxing Monthly</em> (since 1990) and <em>Boxing News</em> (since 1993). His work has also featured in <em>The Ring</em>, <em>Fighting Fit</em>, <em>The News of the World</em> and <em>The Sunday Times</em>. Between 2012-18, Cardiff based Evans provided much of the copy for the Frank Warren Promotions and BoxNation websites. He briefly worked as a boxing commentator for Setanta Sports and Channel Five in the noughties and, for the past decade, has served as a member of The British Boxing Board of Control’s Awards Panel