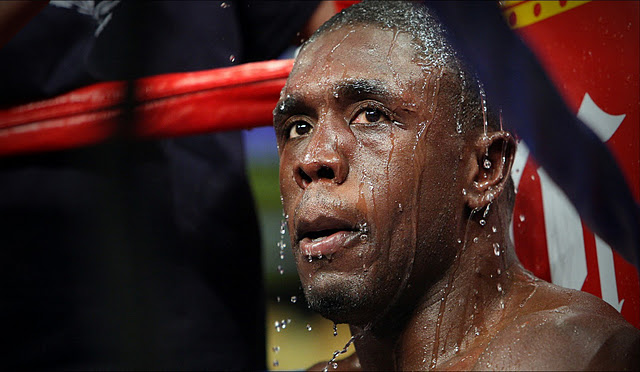 FORMER two-time welterweight ‘world’ champion Andre Berto and his team are preparing to close training camp on Monday and head to Cincinnati for his 2014 debut. The 30-year-old will take on Steve Upsher Chambers in welterweight action on September 6 in his first bout since suffering a significant shoulder injury in July last year.

Berto will return to the ring on the eve of his 31st birthday and the 2004 Haitian Olympian plans to show boxing fans what they’ve been missing in his absence.

“The shoulder is feeling good and we’ve had a tremendous camp. I was able to get out here really early for this fight and train with all the great champions in our gym. I’m just excited to get back under the lights and perform on September 6,” Berto said.

As one of several champions in Virgil Hunter’s gym, Berto has enjoyed the chance to train alongside boxing stars Andre Ward, Abner Mares, Alfredo Angulo and Amir Khan.

The Bay Area facility is the boxing version of the United Nations with five 2004 Olympians from four different countries (United States, Mexico, Haiti and Great Britain) training there. Berto has been ringside for some of his stablemates’ bouts over the last several months and attending those fights has certainly driven his desire to step back through the ropes.

“It was good to be able to be there to support those guys. I learned something from each one of them. Now it’s my turn and I’m ready to go out there and put on a show in Cincinnati,” Berto said.

Berto and his team will travel to Cincinnati on Tuesday to finalise preparations for the SHOWTIME tripleheader at U.S. Bank Arena.