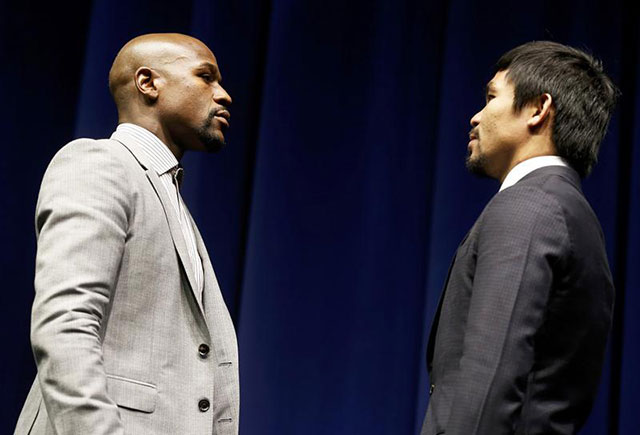 FLOYD MAYWEATHER and Manny Pacquiao are one month out from their May 2 blockbuster bout that promises to break all kinds of records for a boxing event. Ticket pricing at the MGM Grand Garden Arena has been set at a range of $1,500 to $10,000, which will yield $74 million in gate receipts, almost four times the previous record of $20 million for Mayweather vs. Canelo Alvarez in 2013. The foreign rights to the fight sold for a record $35 million, according to Top Rank head Bob Arum, who promotes Pacquiao.

The wild card in whether the fight ultimately grosses $400 million or $500 million is the pay-per-view number. Mayweather-Alvarez holds the current record with $152 million in PPV receipts and around $200 million for total revenue. The current record for PPV buys is 2.5 million for Mayweather vs. Oscar De La Hoya in 2007. The May fight is expected to crush both PPV numbers with at least 3 million fans buying the fight, grossing more than $300 million.

The paydays for Mayweather and Pacquiao will be determined by the PPV buys and the ongoing negotiated split between the pay-TV distributors and HBO/Showtime. The usual split is 50-50, but HBO and Showtime are proposing to keep 70 per cent of the pot this go around with most of that filtering down to the fighters. The fighters are set to split their share of the pot 60-40 in Mayweather’s favour.

It promises to be a historic payday for both fighters with Mayweather likely to earn at least $150 million and Pacquiao more than $100 million. The paychecks can soar much higher if PPV buys blow past three million. Mayweather’s haul translates to the biggest yearly earnings by an athlete ever, breaking Tiger Woods’inflation-adjusted record of $125 million for 2008. Mayweather will set the record with 36 minutes of work in the ring no matter what he does the rest of the year. Mayweather’s earnings could reach $200 million over the last 12-months if you factor in his September 2014 bout with Marcos Maidana, where he pocketed $32 million.
There have been 14 instances of active athletes making $100 million over the course of 12 months, including endorsements and adjusted for inflation.

Mayweather and Pacquiao’s 2015 paychecks will bring the total to 16. Woods is the dominant figure producing eight of these seasons. He is joined by boxers Mike Tyson, Evander Holyfield and Mayweather. Formula 1 legend Michael Schumacher earned an inflation-adjusted $100 million in 2004, while Michael Jordan breaks up Woods’ stranglehold at the top with two years earning $115 million. Salary caps and luxury taxes restrict the earnings power of the biggest superstars in team sports.

Jordan is the only team sport athlete to crack the list in the two seasons where his Chicago Bulls’ salary topped $30 million. Jordan’s playing salary the other 13 years of his career peaked at $4 million. Jordan, of course, was also the most marketable athlete of the 1980s and 1990s and earned nearly $50 million a year from endorsements late in his NBA career. MJ is still killing it with earnings of $100 million in2014 that makes him the highest-paid retired athlete thanks to Nike’s $2 billion Jordan Brand.

The $100 million years by the athletes below are culled from Forbes’ 25 years of tracking athletes’ earnings. It is a relatively safe bet that no one ever banked $100 million before 1990 with the money in sports then just a fraction of what it is today. Arnold Palmer made only $1.9 million in prize money over the course of his career. Boxing purses for PPV stars Tyson and Holyfield didn’t skyrocket until the 1990s. Massive playing contracts for athletes in team sports are a relatively new phenomenon. Take baseball, which ruled team sports for most of the 20th century. The highest-paid players before 1990 included Babe Ruth (1930, $1.1 million in 2015 dollars), Dick Allen (1974, $1.2 million) and Dave Winfield (1981, $3.6 million).

Mayweather’s payday dwarfs the compensation for most of the other best-paid in their fields. Beyonce was the highest-paid musician with $115 million in the 12-months ending June 2014. Howard Stern and Simon Cowell were tops in their fields over the same period. Oracle’s CEO Larry Ellison was America’s best-paid CEO in 2013 with $76.9 million (2014 figures are still being reported). But “Money” Mayweather can’t touch the top guys on Wall Street. Steve Cohen, who last year converted hedge fund SAC Capital into a family office that mainly manages his personal fortune, banked $1.3billion last year as the highest-earning hedge fund manager.

The world’s 100 highest-paid athletes earned $2.75 billion last year, led by Mayweather at $105 million. Credit the rise of TV and endorsements, largely fueled by $30 billion-in-sales Nike, for the massive increase in pay for athletes over the past two decades. But the record-setting May 2 fight isn’t about TV or endorsements. It is a function of six years or buildup to settle who is the best fighter of his generation. Money Mayweather is already assured of being the earnings’ champ, but the boxing title will be settled in the ring.

Earnings cover the previous 12-months from when Forbes issue was published.