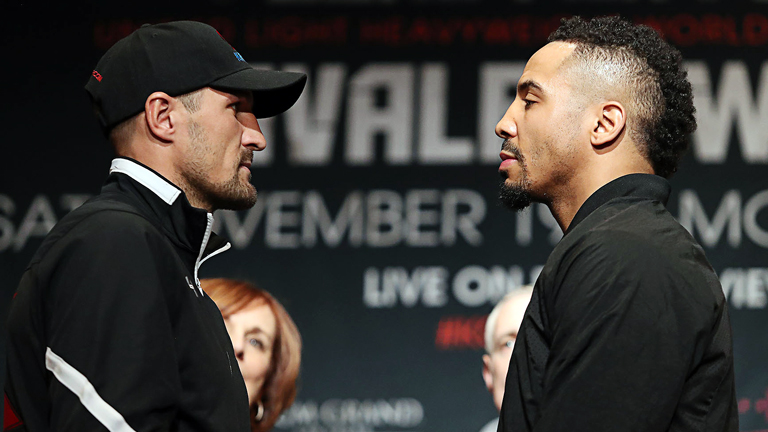 IT’S not so much a buzz out here in Las Vegas but an appreciative hum, ahead of the best matchup the sport has produced in recent years. It’s a contest that deserves louder fanfare, but the audience that are here – who today turned up to the MGM Grand Garden Arena to watch Sergey Kovalev and Andre Ward both weigh in at 175lbs – recognise the potential beauty of this showdown.

In an era loaded with too many predictable bouts, this one is exceptionally hard to call. Not only that, the two fighters are at or close to their peaks and come into this bout without a professional defeat between them. However, that doesn’t always to equate to a great fight: Think Felix Trinidad squeezing past Oscar De La Hoya, think Mike Tyson obliterating Michael Spinks. But boxing needs fights like this to show it’s not scared of matching the best with the best.

“I don’t know why there’s not a bigger buzz, because this is a great fight between two fighters who are undefeated, and in this sport you should only have one champion, one winner,” former world heavyweight champion Lennox Lewis told Boxing News.

But some are suggesting that this isn’t the 50/50 fight as advertised. “Ward is going to win easily, you’ll see,” said Floyd Mayweather Snr today, his opinion perhaps the most common prediction among fans and insiders. However, if it’s not 50-50, it’s close, with plenty tipping the size and strength of Kovalev to be too much for a fighter whose best form to date came in the super-middleweight division.

Without question, though, whatever the outcome, this is a meeting to cherish.

The fighters, too, are warming up for the fascinating clash of styles that is staged at the nearby T-Mobile Arena, a befitting slick and snazzy arena that can hold 20,000 people. It seems extremely unlikely the venue will attract that many – less than a tenth of that figure were at the weigh-in today – as music promotional company Tidal today revealed they will be giving tickets away to the event.

Certainly, today’s event lacked the razzmatazz of, say, a Floyd Mayweather weigh-in, but was far more intense as a result. While the fighters have largely been respectful of each other in the build-up, the hostility is certainly growing as they prepare for the biggest fight of their respective careers. The winner will have a strong case to be recognised as the best in the sport.

“He don’t like me and I don’t like him,” Ward said after coming right on the light-heavyweight division limit. “I’m not leaving Las Vegas without those belts… I believe tomorrow I will be the best I’ve ever been. That’s what we’ve been training for.”

Russia’s Kovalev thrived in playing the villain, smiled broadly at the jeers that greeted him and said, in true Ivan Drago style, “I am really excited to be here, and tomorrow I will disappoint you.”

Ultimately the hope is that boxing is not disappointed. That whoever wins looks good while doing so. That Ward turns in a masterclass, or Kovalev unleashes a frightening exhibition of power.

This contest needs a new leader to stand up and impress. If that’s the case, the sport will look good too.