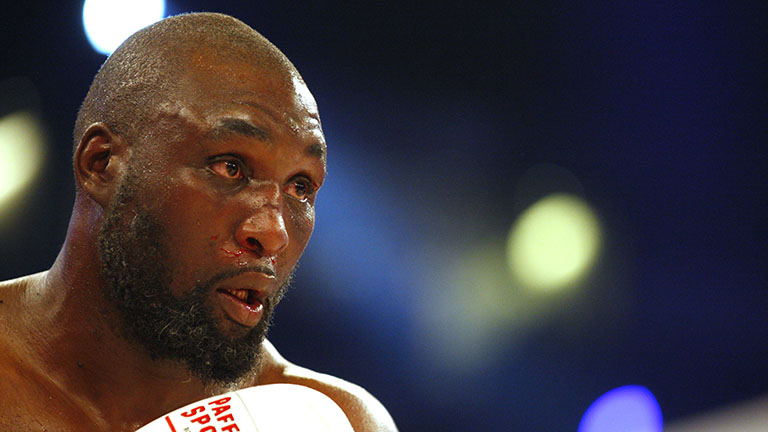 After a grisly outing, not licensed by the British Boxing Board of Control, Danny Williams must retire once and for all, writes Matt Christie

DANNY WILLIAMS first told Boxing News he was “shot” in 2008. Two years later, he said he had no chance of beating Dereck Chisora in a British heavyweight title fight before he was knocked out in two rounds. This week, after being stopped by a former lightweight, Williams spoke of fears that boxing could kill him.

It wasn’t that simple, though. His daughters were in a costly private school and he was determined they would stay there. When you’re a retired boxer who once beat Mike Tyson, as Williams famously did in 2004, money isn’t hard to come by. All you have to do is come back and fight.

With his family at the forefront of his mind, Williams returned in 2011.

Advised to stay out of the ring by the British Boxing Board of Control’s (BBB of C) Robert Smith, and told his application for a licence would be denied, Williams fought on the continent instead.

“There was no way we could licence Danny again after all he had been saying about being ‘shot’,” Smith told Boxing News. “We had meetings with him and he indicated he wanted to re-apply for his licence but we made it clear he would be wasting his time. We didn’t hear from him again.”

Since that Chisora loss in 2010, Williams has fought 29 times (that we know of). Of 18 losses, nine came via knockout. None were under the jurisdiction of the BBB of C.

His latest outing came in a controversial encounter on Saturday night (July 28) when he was thumped to defeat in 10 rounds inside Aberdeen’s Beach Ballroom by former British and Commonwealth lightweight champion, Lee McAllister.

Williams was licenced by the Czech Republic, the spurious World Boxing Union (WBU) sanctioned it as a ‘world heavyweight title fight’ while the event was commissioned by the British and Irish Boxing Authority (BIBA). BoxRec have refused to reference the debacle on their website.

The veteran’s corner was headed, somewhat inexplicably, by BIBA boxers who had already fought on the same bill, Marty Kayes and Ryan Kilpatrick. They threw in the towel after Williams was dropped for the third time in the contest. Former pro Lee Murtagh was the referee who accepted the surrender.

Gianluca Di Caro, the Executive Vice President and CEO of BIBA – who are not a member of the European Boxing Union (EBU) – admitted he had concerns going into the bout. Though he opined that Williams should not be fighting anymore, “all the obstacles I put in the contest’s way were cleared.”

“I didn’t want Danny to box on a BIBA licence because I felt that we would be criticised,” Di Caro explained to Boxing News. “Danny still fighting is a concern, he isn’t the fighter he was. But he had won his last four fights, three in the first round.”

Di Caro continued, “He passed all the strict medicals and you can’t just deny someone the right to fight just because of your own personal opinion – it’s not fair on the boxer. He was fit to fight and he wanted to fight… I was expecting the EBU to veto the contest but they didn’t.”

The EBU, though, could not have prevented the fight from occurring.

“I believe we should make clear that the EBU is not Europe‘s governing federation but only responsible for the EBU title fights,” Peter Stucki of the EBU told BN. “We can therefore not decide on any other boxing contest outside the EBU championship contests.”

Di Caro claimed to initially be against the bout out of concern for McAllister, best known as a lightweight and super-lightweight, due to Williams’ punching power and size advantage (Lee weighed in at 206lbs while Williams tipped the scales at 261lbs). He expected Williams to knock out the Scotsman, despite McAllister faring well against another heavyweight, Lee Kellett, in a heavyweight bout commissioned by BIBA in April.

Di Caro, who was ringside, said the contest was “exciting” and Williams “proved to anyone he can hold his own in the ring.” He did however admit that his “concern switched from Lee to Danny from round six,” because Williams’ balance had started to falter as he came under fire.

“I am proud to have hosted the fight,” Di Caro added, seemingly oblivious to the knot of contradictions he found himself in. “It was a good fight overall, very exciting at times, and it would have been wrong to deny Danny the chance to earn a living.”

To summarise, Di Caro didn’t want the fight to occur out of concern for both of the fighters. He knew the preposterous bout would be ridiculed so he did not grant Williams a BIBA licence. He admits 45-year-old Williams was struggling as early as the sixth round yet is proud to have staged a fight that lasted until the 10th.

It is Williams’ description of events that is the most distressing.

“But I pushed through it and done my job. My reason for continuing to box was because I wanted to see my girls in private school away from the mad people I grew up with in South London.”

It should be noted that nobody has been forcing Williams to fight. He kept fighting because he was putting his daughters first. We shouldn’t knock any parent for that.

But it must also be said that nobody should allow him to fight again if he goes back on his latest retirement announcement – whatever his reasons for wanting to come back might be.

It’s been 10 years since he admitted he was shot. It’s been eight years since he was advised to retire. He has taken countless punches since then. His kids won’t thank him for taking any more.