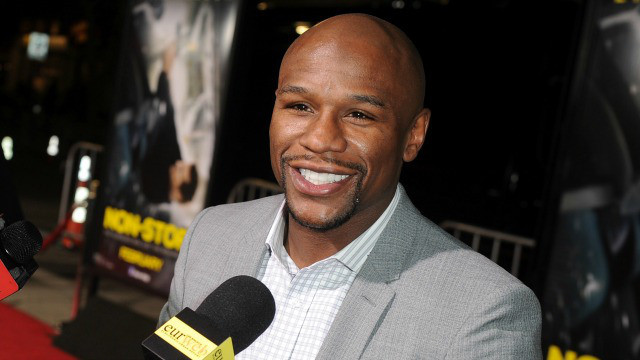 THE Fight of the (21st) Century is less than one month away and the big news this week is the cost of Floyd Mayweather’s mouthpiece.

According to gossip site TMZ, the American superstar – who is set to earn more against Manny Pacquiao than Beyonce will pocket for the entire year – is splashing out $25,000 on a mouthpiece entrusted with protecting his teeth from the Filipino’s punches.

The report claims that the mouthpiece will have diamond dust and flecks of gold on the outside and real $100 bills crammed inside.

The ostentatious piece of kit has been designed by a New York dentist, Lee Gause, and Mayweather is quoted as saying, “My career’s gone on 19 years and I’ve been able to preserve my smile.”

Meanwhile, Pacquiao was excited to welcome Australian Christian evangelist, Nick Vujicic, into his home last night (April 6). Vujicic – born without all four limbs – is an inspirational figure throughout the world.

“Thank you @nickvujicic for visiting us tonight,” Pacquiao tweeted. “You inspire me to be thankful and to love the Lord more everyday.”

While you may have an opinion on Mayweather’s wealth, or Pacquiao’s faith, it’s becoming hard to form an opinion on the fight itself. Their press conference was decidedly low key (albeit fascinating to see the two in such close proximity after years of the opposite), and the build-up has been so devoid of battle cries one would be forgiven for thinking the pair are contestants in X-Factor rather than rivals in what promises to be the highest grossing boxing match of all-time.

Let’s take a trip back in time, to the heady days of when Joe Frazier and Muhammad Ali were preparing for their own Fight of the (20th) Century. With less than a month to go before their March 1971 New York battle the showbiz threatening to stifle the excitement out of Mayweather-Pacquiao today was absent from the camps of Frazier and Ali.

On the back page of Boxing News, dated February 19 1971, there was a photograph of Frazier training out in the Catskill Mountains (below), with his beard, his eyelashes, and sweat frozen as he attempted to do his roadwork in 17 inches of snow.

The world heavyweight champion was eventually forced to retreat to his home in Philadelphia to defrost, and complete the necessary running.

One week later, Boxing News reported from Ali’s training camp in Miami Beach. The challenger played to his role as people’s champion by promising to announce exact predictions of Frazier’s demise just five minutes before they got in the ring – but only for the closed-circuit audience.

“The people in the theatres and in the big arenas around the world who will be watching me take back my crown from that amateur Frazier are my people,” Ali said. “They can’t afford the fancy prices at Madison Square Garden so I’m going to speak to them and them only from my dressing room exactly five minutes before the fight.”

The times have changed dramatically since then, of course.

But let’s hope, in this garish era of celebrity, that Mayweather and Pacquiao eventually create a spectacle to do boxing, and their century, proud.

Just like Frazier and Ali managed so gloriously 44 years ago.