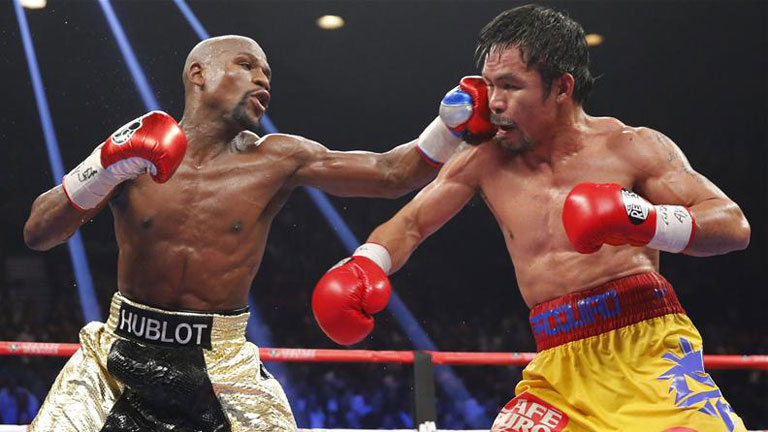 PLASTIC girls teeter on skimpy heels, pout heartily and attempt to snare Floyd Mayweather’s attention. But the superstar, a slighter figure than one might expect, is otherwise engaged. A queue of revellers, that stretches a full 25 metres inside a reception room in the London Park Lane Hilton hotel, line up in front of him clutching pre-paid vouchers that entitle them to a photograph with the American. Floyd entered the room wearing a peroxide smile that will remain fixed to his face for the next four hours, until he leaves, bundled off by two gargantuan bodyguards, head down, and away from the glare of expectation.

The girls step back, deflate their cleavages, and reach for the champagne – “it’s just fizzy wine,” one observes while glugging it back – being given away by ornamental waitresses. Somehow, the occasion, the surroundings – particularly in this 1980s orange room – do not befit the most successful athlete of the 21st century. Tired-looking walls are sporadically decorated with imagery of Mayweather, and security, besides those two aforementioned giants, appears to be at a minimum. Tickets are rarely checked, and a suit and a nod is all it takes to re-enter. Those tickets, for An Evening With Floyd Mayweather, cost up to £600 (though a basic package could be snapped up for as little as £300), yet expectations of a celebrity carnival are dashed almost immediately. The red carpet gets little attention; Chris Eubank, who is delighted to be recognised alongside his dress code-evading son, Chris Eubank Jnr, nudges footballer Emile Heskey into second place as the most famous attendee. Heavyweight Dereck Chisora is also present, only too pleased to embrace any recognition that comes his way with his one-in-a-million manner. Elsewhere, former WBO heavyweight title challenger Scott Welch, who provided some assistance in putting the evening together, is happy to stand on the sidelines, while Kevin Lueshing, dressed in eye-catching velvet, looks like he hasn’t put on an ounce since he retired from the ring 17 years ago. The rest of the crowd, besides those wannabe wags, are predominantly Mayweather diehards who are giddy just to breathe the same air as their hero, and the odd banker-type pleased to be at the most expensive party in town.

Perhaps it’s been too easy to criticise Mayweather in recent years, and here, on this surreal evening, the 38-year-old is charm personified, obliging the odd rogue photo request, and signing most of what is shoved in front of him. His assistant, the tenacious Kelly Swanson, occasionally objects but Mayweather, displaying none of the arrogance he is saddled with, overrules her almost every time. After 90 minutes of autographs and camera snaps, Mayweather is the last one to enter the banqueting room where food will be served. While the crowd’s love is similar – there’s a rapturous roar as he walks in – this whole event is a far cry from where Floyd became “Money”. But this is the life of the ex-fighter, and Mayweather insists this is how he wants it to be now – away from the ring and enjoying the fruits of his labour which, by his own estimation, total a handsome $800m. He insists, several times, that his boxing career, at least as a fighter, is over.

“To retire from the sport, and not let the sport retire me [is my greatest achievement],” he says. “Leaving the sport with all my faculties, being able to make sure my children have the best education, being able to put my family in a very, very comfortable position. That’s the best.”

Decoratively, with tasteful lighting and expertly laid dinner tables, the ballroom where Mayweather delivers his address is more like it. But his supporting acts are a curious bunch. A long-legged singer warbles gustily. Although she’s keen to impress, like a karaoke veteran tackling an X-Factor audition, one immediately wonders what Mayweather – who recently retired with an immaculate 49-0 record and this time last year was preparing for the richest fight in boxing history – makes of the entertainment. A more talented musician follows before Richard Blackwood unleashes a comedy act that is two-parts amusing, and eight-parts inappropriate. Later, Mayweather participates in a street magician’s act that includes replacing the Queen’s head on a £10 note with Floyd’s own, and turning the cola from a Pepsi can into milk (you have to see that mind-bending stunt to believe it.) But what people have come to see, and hear, is Mayweather deliver memories of a sparkling career.

Talented broadcast journalist Ronald McIntosh, who sits on a high stool, is armed with questions he hopes will extract such accounts. Floyd sits opposite him, the room darkens, and expectation builds. Over the next 45 minutes or so, the Las Vegas resident answers everything thrown at him, even if some of the answers bare no resemblance to the question. Neither McIntosh, nor an energetic Spencer Fearon, who takes over to invite questions from the audience midway through, can be blamed for Mayweather’s lifelong habit of failing to reveal himself. It’s a crying shame he does not, because occasionally when his guard drops or the mood takes him, he’s an engrossing character. Mayweather has been boxing for as long as he can remember, but evidence of a rocky relationship with his father, Floyd Mayweather Snr, is evident.

“My father knew what he wanted me to do. If you know what you want your child to do, you can influence that child, force the child, from a very young age. Boxing was basically forced upon me,” Mayweather explains. He refuses to credit his family – that also includes former world champion Roger Mayweather and Jeff Mayweather – when asked where his talent came from.

“Ricki Brazil played a major part, he’s been a childhood friend since I was 12 years old,” the Michigan-born star says. “You only talk about the people that you see on TV, like my father, my uncle Roger, you don’t talk about my nephew or my sisters, the people that come to the boxing gym every day. I’m feeling very grateful to those people because they believed in me from day one just like I believe in myself.”

Wherever the talent came from, that belief – which often manifested itself in verbal tirades that offended many – is what set him apart from the rest.

“I remember going to the boxing gym, and it was less than a block away from my home, going every day, swinging heavy bags. I knew I was going to eventually be a great fighter. When I was 17 I was the best fighter in the boxing gym, I was better than them all already, and I knew it was destiny for me.”

That brash attitude is clear in some of his responses today. Ashley Theophane, the British fighter who Mayweather promotes, and who sits on his table, becomes his stock response to anything he doesn’t want to talk about. McIntosh dutifully extricates, though, and a question about who would win out of the young version of himself, and the wise old master of 2015 is greeted with a smile.

“I feel like any athlete in the sport will prosper if they’re more accurate. When I was younger I was accurate, but when I was older I’d use wise tricks because I’ve been around the sport for so long. Earlier in my career I beat a lot of guys who had way more experience than I did. But the sport has been great to me. The fans have been great to me and I want to take my hat off to everyone who came out to support this event. You were the ones who made me work hard, push myself, dedicate myself.”

And there it is, that well-trotted ‘hard work, dedication’ mantra. Love him or hate him, Mayweather gave his life to boxing in a way that few have. Even when filthy rich, the fighter would train like a poor man, and make it all look so easy.

“I don’t believe in settling for less. If someone said I can’t accomplish something, I just don’t listen. When I was in my zone, I knew that no one in the world can beat me. There were days when I went out there when I didn’t feel good and I still got the job done. When I fought Miguel Cotto I didn’t feel the best but I still got the job done. Some fighters have good days, some fighters have bad days, but I was lucky to have 49 good days.”

Some might say that his most satisfying day was when he brilliantly eased through the threat of long-term nemesis, Manny Pacquiao, in May 2015.

“When I think back to the Pacquiao fight, the city [Las Vegas] was crazy,” Mayweather merrily reflects. “One of the hotels across from MGM Grand, I think it was the Tropicana, Nike paid to have Pacquiao’s face down the side of the hotel. My face was on the MGM Grand, and my picture is still on that hotel, but the crazy thing is this: within a few hours of the fight finishing, the Pacquiao banner was gone. I had a remarkable career, and sometimes I just sit and think back to when I was a kid, how I would lie in bed and think about what I was going to do. I would get up and shadow-box all day, hoping, dreaming and wishing that someday I would become the best. It came true.”

His fans cheer. They love him. They always have, and it’s those paying customers who should be the real judges of the night. And those fans, who queued, who pouted, who paid, and hanged their admiration on his every word, show no sign of discontent at all. Yet again, Mayweather gets the job done with the minimum of fuss.