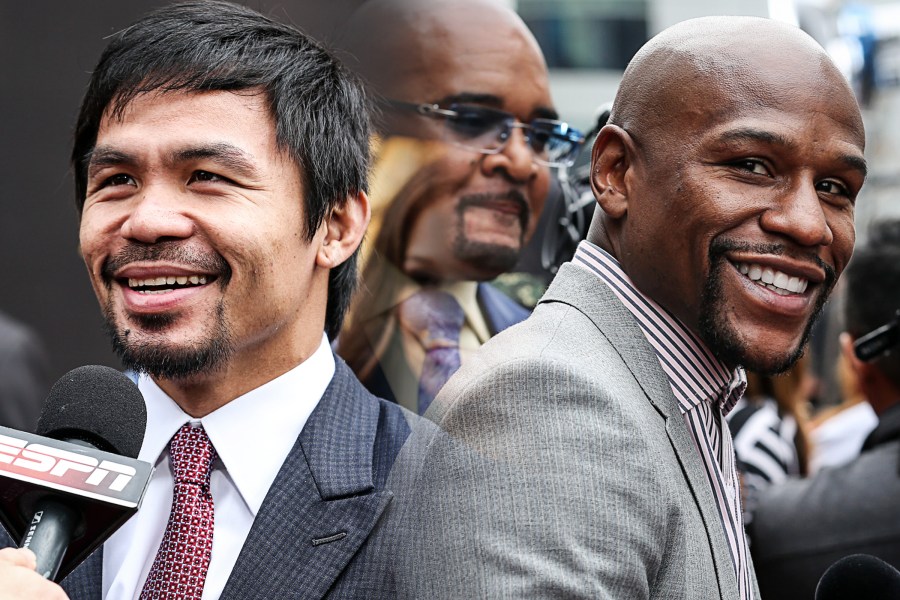 What does it mean for Sky getting the Floyd Mayweather-Manny Pacquiao fight?

It’s fantastic news, it’s not just fantastic news for my team, who worked so hard and deserved something like this, but it is for the whole of Sky Sports. The place was buzzing when they heard the news, alive. I think Sky Sports is the place where we put big events on. Whether it’s a Ryder Cup or the Masters or the Ashes, a Champions League final or a Premier League decider…. This is our iconic moment. This is the moment that we’ve been waiting for in boxing for some years. The two best fighters in our generation getting together and I’m absolutely delighted. It was tough, really hard over the last two or three weeks.

It’s one of the great moments in all my time at Sky to actually land the rights. But now we’ve got the work. Now we’ve got five weeks to get on make sure that we produce the best programming, the best team out there. We’re all over the week in Vegas, which will be momentous.

Mayweather–Pacquiao is undoubtedly the centerpiece of 2015.

What’s the process for actually winning the rights, how much does it cost, how does it work?

It’s tough. Ultimately it’s a financial negotiation and it’s something that we have to find the right people to deal with. In this case it was Mayweather and Pacquiao’s teams. You’re dealing with two lots, just like HBO and Showtime were working together, there’s two entities with that. So we had to go to them and we hoped that they would like the fact that obviously we’ve got a big reach on Sky, that we have done many fights of a big nature before. We were there for Lewis-Tyson when Showtime and HBO worked together. We’ve done the big historical fights on Sky, the likes of Bruno and Tyson and Holyfield, the likes of Lennox Lewis and all the great ones. Hatton-Tszyu, nights with David Haye and Klitschko recently.

Obviously finances were very important but we got over the line. But it’s onwards and upwards. And let’s bring it on.

I’ve seen figures floating around that it cost 10 million or three million, can you comment on how much it was?

I don’t know what it cost but obviously it’s a pay-per-view model, it’s a Sky Box Office model, it’s different to just paying a fee for rights, which often you do in sports negotiations. So it’s a different model, so it depends on the numbers that are generated from the buys on the night etc. But what I do know is that it will be fantastic for both Sky and for Mayweather and Pacquiao. At the end of the day, they are making a lot of money from this fight, more money than anyone’s ever made from a boxing match, it’s extraordinary. When you think about it, they’re selling the fight for 90-100 bucks in the States. We’re £19.95, I think it’s a very reasonable price for the Box Office event.

Do you have less time to prepare than you’d expect?

It’s only five weeks [to go]. Normally we’d have a 12 week build up and we’d talk about it for a couple of weeks and we’d let it go a bit obviously get on with other things, then we start the build up two or three weeks before. But because there’s only five weeks with this it’s all guns blazing and certainly after Easter it will be non-stop.

I was lucky enough to get to Mayweather’s camp when I was in Vegas and he’s in phenomenal, phenomenal condition already. It was a privilege to watch him spar. No cameras were allowed but we had a real good insight. Then we went to see Manny and that was all closed off, we had a good chat with Freddie Roach and Justine Fortune. We spent some time with Manny when he came to London a few weeks back. That was good to get a real insight. But they’re right in it already. Training is well, well underway. They’re deep into it and the vibe coming out of both camps is pretty strong. I think that they’re going to be at their very best. People say it’s a fight that’s a bit too late. Five years ago we could have had one, we could have a trilogy by now. But I say look, we’ve got them in the ring together, that’s what matters. If people think Mayweather’s slipped slightly or Pacquiao’s slipped slightly, it might throw a different perspective on the fight itself. I know what I believe, what I think is going to happen in the fight but it’s a subjective thing. Every fight fan will be thinking something different. Mayweather starts the favourite. Pacquiao brings his speed, his agility and his power and his heart as well. It’s going to be a great, great night on May 2 and the early hours of May 3, it really is.

I think something special’s going to happen I really do.

I think I can safely say in over 20 years of covering this sport, Floyd Mayweather is the best fighter I’ve ever seen in a gym and I think he’s the best fighter that’s laced them up since Sugar Ray Leonard. Maybe that’s a big call but that’s what I believe. And I’ve seen Manny Pacquiao train in a gym, I’ve seen Oscar De La Hoya, Roy Jones at his peak, Lennox [Lewis], Naseem Hamed, all of them, a lot of fighters since I started and I’ve been very privileged to do that. But I saw a Floyd Mayweather session maybe eight, nine years ago and I’ve never seen anything like it. What I saw a couple of weeks ago, it was the same Floyd.

Floyd is phenomenal. He’s just a unique athlete and I think that he leaves no stone unturned. He’s brought a few different things in this time, he’s chopping wood, he’s working on a bit of power. I think maybe he wants to make a bit of a statement on May 2. The smart money says this fight goes 12 rounds, unless maybe Pacquiao can get him out of there. But I wonder if Mayweather is planning a little bit of extra power himself. I think it’s going to be fascinating.

So if you had to pick an outcome?

I think Mayweather wins the fight. But again I might change my mind in the weeks to come. My opinion doesn’t matter. What matters is what happens on the night. Johnny Nelson thinks that Pacquiao wins and I’m sure that there’s many other people that think that Pacquiao’s wrong for Mayweather. I just think that Mayweather is such a great fighter, the way he controls space in a ring. I think he’ll be very, very difficult at his best and I believe he will be at his very best on May 2 because he can’t afford not to be. He was nervous at the press conference in LA. I think that was a really, really good sign. It means the world to him. I think he’s been annoyed that the fans have pushed him into this. He could have easily gone his career without fighting Pacquiao. So it’s annoyed him a little bit and I think there’ll be a bit of needle in there.

Having said that, I think Manny Pacquiao will give absolutely everything because he knows only one way and that is to give everything. I think he’s been an amazing character, winning world titles at so many different weights and where he’s come from. He’s a phenomenal story, he’s a great guy and I think that he brings a lot of dangers into the ring with him, with speed and power and that southpaw style, which Mayweather’s not as comfortable with as the orthodox – but he works out a way to beat fighters. I think Floyd Mayweather’s utter outclassing of Juan Manuel Marquez, I was ringside, was one of the great performances I’ve seen. Because, although the weight was a difference in there and you might have felt Marquez was at too much of a disadvantage, he didn’t get a look in. And Juan Manuel Marquez is one of my very, very favourite fighters, who I have so much time for. Intelligent, a wonderful counter-boxer, beautiful mover, terrific ring general. Mayweather just made it look so easy and I go back to that. I go back to the fact that Pacquiao struggled with Marquez and Pacquiao’s going to struggle with Mayweather over the distance. So I go for Mayweather, to answer your question, but I know a lot of people are going for Pacquiao and I think the money is coming in on Pacquiao. Maybe I’ll change my mind. But I don’t think so. I’m a big fan of both of them. But I think Floyd Mayweather wins this fight.

CLICK HERE TO BUY THE ULTIMATE FAN’S GUIDE TO MAYWEATHER-PACQUIAO FOR ONLY £6.99