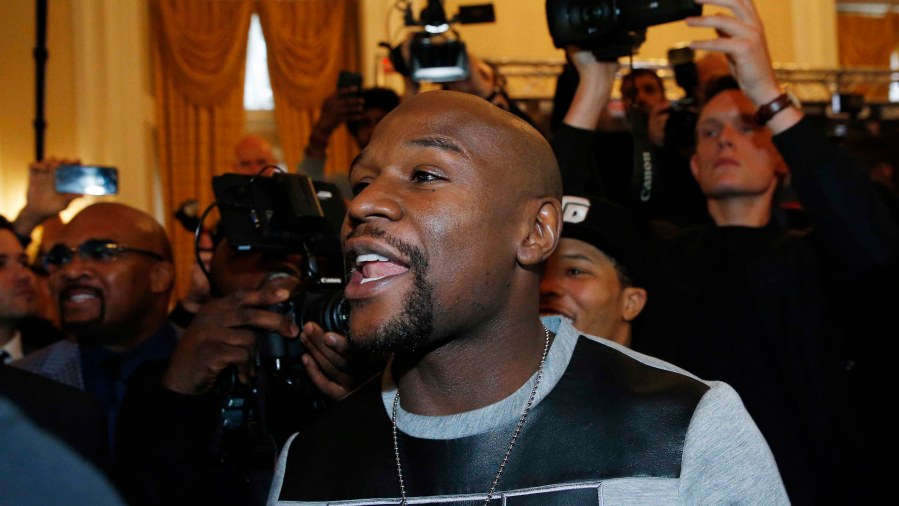 'I'm 40 and I'll kick all three of your asses in the same night,' Floyd Mayweather declares. John Dennen reports from a bizarre press conference

GERVONTA ‘TANK’ DAVIS and Liam Walsh are the main event fighters on Saturday’s show at the Copperbox in London, but today’s press conference was overshadowed by an explosive row between Floyd Mayweather, an all-time great fighter and Davis’ promoter, and Liam’s brothers, Ryan and Michael Walsh.

The dispute began at the press conference, as they quibbled over Mayweather never boxing abroad during his glittering professional career. It quickly descended to insults being hurled from either side.

“I’m 40 years old,” Mayweather told them, “and I’ll kick all three of your asses in the same night.”

Michael Walsh shouted, “We aren’t bothered about you because our brother’s kicking your man’s arse.”

On the stage Liam did not look delighted at the way events were unfolding.

But with the formal portion of the press conference finished, Mayweather continued to stir up mayhem. Amongst a pack of security men, entourages and plenty of cameras he confronted them again. Before, with a broad smile, clambering up on a table to order them to: “Get the f*** out of here.”

It was a sight I doubt the London’s Landmark hotel has ever seen before.

Speaking after the incident, Mayweather said, “I had fun. I was f***ing with them, shooting the s*** at them. I’ve been here before. It’s about Liam Walsh and Tank fighting. It’s not about them. They came here trying to steal their brother’s shine. If it was them on the podium they wouldn’t be saying s***. They’d be quiet. They wouldn’t be saying nothing. But let them talk.”