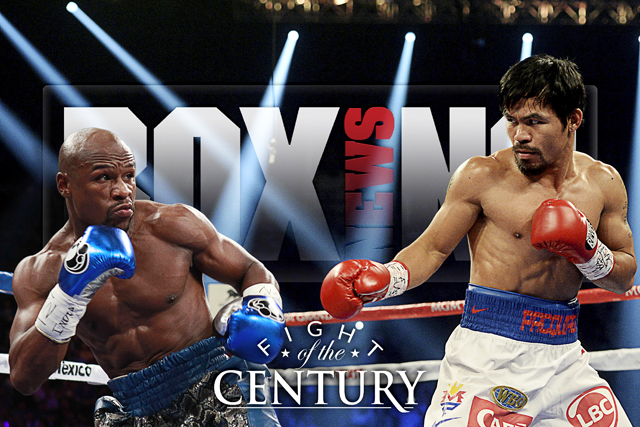 Boxing Science's Danny Wilson applies a scientific perspective to how Floyd Mayweather and Manny Pacquiao train, and he picks a winner

Is it on? Is it off? Will it ever happen? These have been the questions on the lips of boxing fans for the past six years.

Some thought it would never happen, but on Friday 20 February Floyd Mayweather announced the most anticipated fight of the century.

The fight against welterweight rival Manny Pacquiao will happen Saturday May 2 2015.

But now the question beckons, ‘Who will win it?’

We make a prediction based on (speculative) science!

MAYWEATHER AND THE ‘DOGHOUSE’

The Mayweather gym has become one of the most established in the world due to countless media coverage over the past decade.

The doghouse, “hard work, dedication”, “light-work, light-work” and “all-work is easy-work”, have become familiar mantras of the Mayweather gym, but what is the training actually like?

During Kell Brook’s world title camp, our very own Alan Ruddock visited the gym. The gym has a number of talented fighters, and some visiting from around the world. One thing that stands out is the high volume of boxers and the high volume of training they seem to do.

From observation it’s fairly low intensity. However, it becomes high-intensity during sparring, for one reason. The use of 5 min rounds. Particularly from minutes 3 to 5 and as the number of rounds increases.

SCIENCE BEHIND THE MONEY

This changes the cellular environment that muscle has to function in, influences the way muscles are activated and increases the demand on the cardiovascular system to circulate blood. So, it’s likely that the number and force of punches decreases but the demand on the heart and muscle increases!

If we also consider the type of long-slow distance night runs that we’ve seen him do on ‘All Access’, you might mistake Mayweather for a 10,000 m or marathon runner.

So, the 5 minute rounds, countless minutes of sparring and long runs might be good to build endurance, mental strength and determination, but these might limit the ability to produce large punch forces and repeated bouts of high intensity activity.

CAN MAYWEATHER STEP UP THE INTENSITY?

Have we seen any evidence of this in Mayweather’s tactical approach recently? When was the last time we saw some explosivity and zip in his performance?

Does this give the Pacqiaou’s high-intensity approach the edge in this massive fight?

PACMAN TO POWER THROUGH?

Pacquiao was one of the first big-name boxers to use Alex Ariza, a strength and conditioning (S&C) coach. Did S&C increase his punching force and increase his intensity?

Not necessarily, as most of the exercises we see in the media are often bodyweight, low external load and isometric movements often performed for long periods of time or for many reps (watch his 10 minute ab routine). These training methods are not associated with improvements in maximal force production and speed.

At Combat Conditioning we typically use heavier external loads for 3-5 reps to increase the amount of force we can produce. See more in the science behind the punch and impulse articles.

Although he seemed to dismantle opponents during this period with Ariza, this might be due to an increased anaerobic and/or aerobic capacity.

In other words, the size of his engine was probably larger than his opponents. To max out an opponent’s engine, he’d use relatively less gas that meant he could control the fight for longer and still have enough spare for bursts of high intensity activity. Whilst his opponent maxed out and eventually fatigued.

Apart from the demolition job on Ricky Hatton, Pacquiao finds success by constantly grinding people down due to his fitness.

Our prediction is that Pacquiao will not have the killer punch to knock Mayweather out. But he has the high intensity capacity to either grind him down with near constant pressure or get a points victory.

Oscar de la Hoya has said that it was more of an accumulation of shots that beat him when he faced Pacquiao. On the other hand, because of Mayweathers high volume approach to training (like an endurance athlete) he seems aerobically fit, and combined with his tactical skill is able to fight at his own pace.

Does this mean he will be more focussed on quality of shots than Pacquiao and less likely to make mistakes?

Since everyone is making predictions at the moment here is ours.

The (speculative) science indicates a Mayweather victory on points.

Pacquiao will have to go full out to break Mayweather and push him to intensities he is not accustomed to. This is a dangerous game as Pacquiao could become reckless, especially as the fight progresses and indeed if he’s not landing shots.

Mayweather’s offensive and defensive tactical ability will likely cause Pacquiao to miss or be ineffective. And Mayweather’s fitness will likely preserve the timing and quality of his shots.

Ultimately, the judges will favour Mayweather’s tactical ability, ringsmanship and effectiveness of his punches.

Pacman is known to do strength and conditioning and yet we have chosen the Mayweather who probably hasn’t.

Although we use scientific principles, we know full well that skill is the real winner and it’s safe to say that Floyd is one of the most talented boxers the world has ever seen.

However as we all know, anything can happen in boxing…