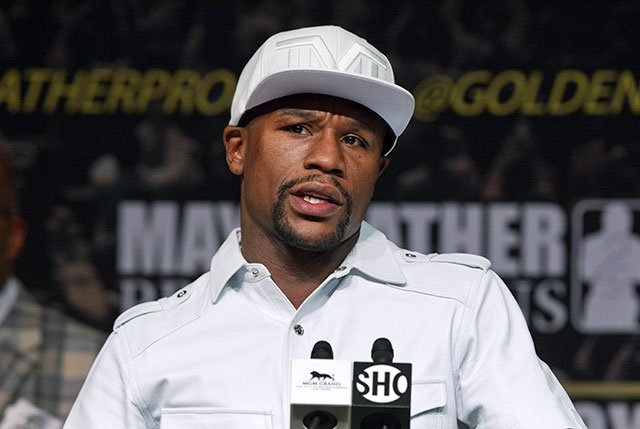 FLOYD MAYWEATHER has confirmed that negotiations for a May 2 superfight with Manny Pacquiao are ongoing but refuted the Filipino’s claims that his side of the deal was signed, boxingscene.com have reported.

Reporter Edward Chaykovsky revealed that Mayweather said: “Hopefully it’s Mayweather-Pacquiao [on May 2]. Of course we are trying to make the fight happen between me and Pacquiao. Are we negotiating? Absolutely we are negotiating. But Pacquiao said he agreed to everything. What did you agree to? You have no say. You have a boss that’s called Top Rank Promotions. It’s not called Pacquiao Promotions. With my company it’s called Mayweather Promotions.”

The unbeaten superstar then spoke of his perennial rival’s apparent slump in recent years as a potential stumbling block on making the fight.

“We have been going back and forth communicating with their team. Hopefully we can make this fight happen. Once again we have to look at his pay-per-view numbers. His last fight didn’t even do 300,000 homes. Figures make sense and he did get knocked out too long ago. No matter what you say, Floyd Mayweather is still winning. When they take shots at Floyd Mayweather he still winning and making hundreds of millions.”

But Mayweather – who is rumoured to be lining up middleweight king and former victim Miguel Cotto instead – insisted he wanted the fight with Pacquiao to take place.

“We’re going to make it happen though. We’re trying but it’s extremely difficult dealing with Top Rank. I don’t want to sit here and point my finger at Pacquiao and say, ‘It’s him’. It’s not Pacquiao, it’s his promoter [Bob Arum]. A lot of the time when Pacquiao says ‘I agreed’, you don’t have nothing to do with this. On a chess board you’re a pawn.”