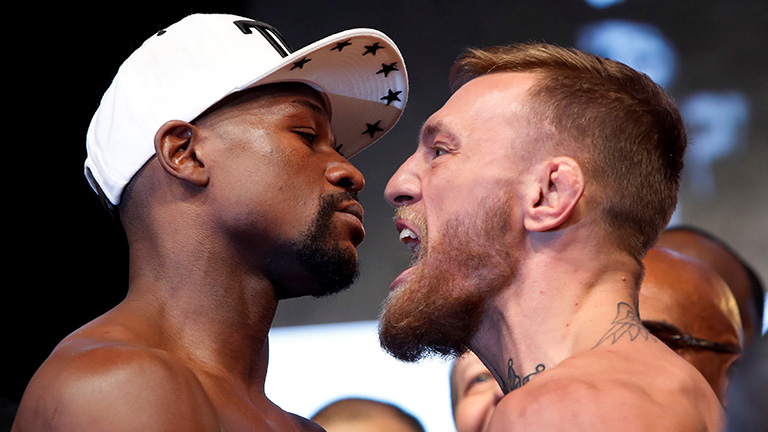 While Conor McGregor is back where he belongs, fighting in the UFC, Floyd Mayweather inserts himself into the narrative

FLOYD MAYWEATHER hinted at a possible rematch against Conor McGregor in the immediate aftermath of the Irishman’s explosive return to the octagon at UFC 246.

McGregor was making an eagerly anticipated comeback after 15 months away and did not disappoint, needing only 40 seconds to stop American veteran Donald Cerrone at the T-Mobile Arena.

It was at the Las Vegas venue where McGregor crossed over to the boxing world for a showdown against pound-for-pound king Mayweather, who extended his perfect professional record to 50-0 with a late stoppage over the Dubliner in 2017.

Mayweather has not fought since then but said in November last year he was “coming out of retirement in 2020” and has teased the prospect of a return meeting against McGregor with a mock poster of the two combatants on Instagram.

The 42-year-old then put up another poster on the social network hinting at a contest against McGregor’s fierce rival Khabib Nurmagomedov.

McGregor had not fought since losing to the Russian in October 2018 but wasted little time in settling into his stride against Cerrone, an opponent with the most wins (23) and finishes (16) in UFC history.

Several unorthodox shoulder strikes in a clinch bloodied Cerrone’s nose before a precision head kick and flying knee proved to be the beginning of the end as McGregor rained down punches on his helpless opponent.

Referee Herb Dean stepped in to wave the contest off inside the opening minute as McGregor claimed his first win in more than three years in a welterweight division where he has little experience.

His only previous foray at 170lbs came when he split a couple of bouts against long-time foe Nate Diaz, who was unimpressed by McGregor, seemingly branding Cerrone “weak” and calling the event “fake” on his Twitter account.