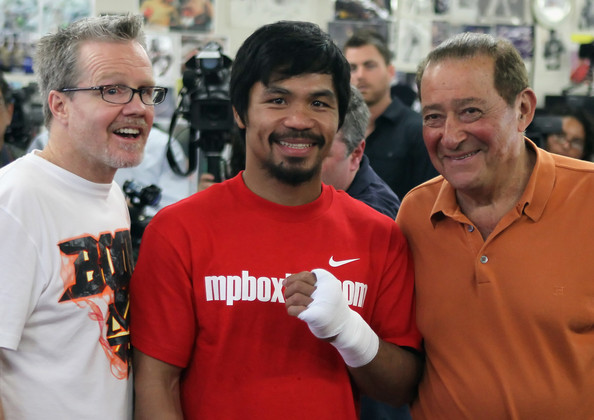 Manny Pacquiao's trainer, Freddie Roach, and promoter Bob Arum make their predictions for the May 2 super-fight

MANNY PACQUIAO is a truly global superstar. Adored in the Philippines, hugely popular among both dedicated boxing aficionados and casual sports fans in America and around the world, yet on May 2 he’s fighting the one man, Floyd Mayweather , who carries the greater sway. Pacquiao’s team describe the American as the ‘A-side’ of this vast promotion but also warn that his status will be short-lived.
Freddie Roach, Pacquiao’s trainer, said, “Floyd should enjoy being the A-side while he can because on May 2 Manny is going to put him on his backside.”
Pacquiao’s promoter, Bob Arum also, unsurprisingly, predicted triumph for the Filipino. “It’s going to be a great fight,” the Top Rank boss said. “We are confident our fighter Manny Pacquiao will emerge victorious.”