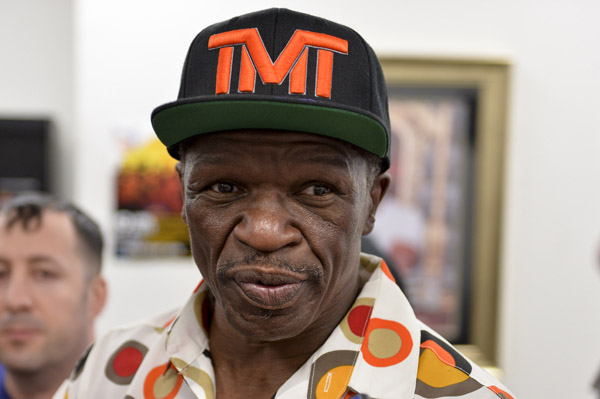 The trainer explains why his son, Floyd Mayweather is a level above Manny Pacquiao, writes John Dennen

THE verbal sparring between the rival Floyd Mayweather and Manny Pacquiao corners has been one of the more entertaining elements of the proxy war before their May 2 Las Vegas  clash. Floyd Mayweather Snr, who is his son’s head trainer, issued a message to his counterpart Freddie Roach. “Pacquiao’s trainer Coach Roach is lying to you. Trying to trick you all. Floyd’s not getting knocked down in the gym. Floyd is the one knocking people down. Roach blows smoke with no hope,” Floyd Senior declared. “I can’t tell you why or how, but here’s an update, Floyd is going to kick his a** and knock Pacquiao out.

“I want you all to see it. It’s so plain and simple what he’s going to do. Even Ray Charles could see it.”

For the first time Manny Pacquiao has examined video tape of an opponent, with Freddie Roach showing him some footage of Floyd Mayweather. But such is Mayweather’s trainer’s confidence he hasn’t looked at any tape of Pacquiao. “There is no reason to study him. He’s not at this level,” Floyd Senior explained. “Floyd is as well-rounded a fighter as there has ever been, but he’s really still here because of his defense.

“Other guys fight with their head and their mind and come up short. It’s his great defence that has kept him on top for so long.”

Freddie Roach’s gameplan has been five years in the making. Mayweather snr though never thought the Pacquiao fight would happen, until it was made. “So many people were trying to say Floyd was scared. Lets see on May 2 who is scared,” his father warned. “Floyd is the best, I must confess. Nothing is going to stop Floyd Mayweather.”