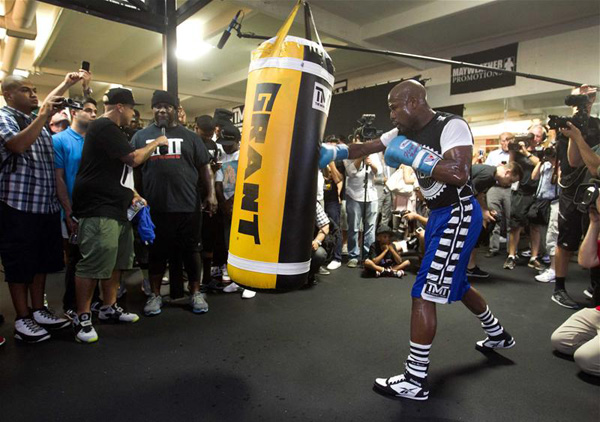 On fighting the winner of Miguel Cotto-Saul Alvarez

You should know what I’ve done to Canelo, Pacquiao, and Cotto. So I’m through with them, why would I fight them in my 50th fight?

Number 49 is my last fight. I’m going to just push the limit for this fight and see what I can accomplish.

Well no one is in my shoes. My health is more important. If you stick around anything too long, anything can happen. I’m not really worried about losing, but I want to have a sharp mind. You can make a lot of money, but you still want to be able to talk, walk, and have a sharp mind.

On his greatest achievement

I regret not having Al Haymon from the beginning.

I’ve been approached on numerous occasions. But I’d rather be behind the scenes. I just feel like I had my time to shine in this world of boxing. But we never know what the future holds. Just keeping my fingers crossed and anything that comes my way then we’ll take full advantage of it.

On criticism of Andre Berto

I didn’t even know. All I do every day is I go to the gym, I train. I leave, I go eat, and go see shows on the strip, go to the movies, go bowling, go shopping. That’s really about it, and just being at home resting. It really don’t matter who I choose. They’re going to always criticize. That comes with the territory.