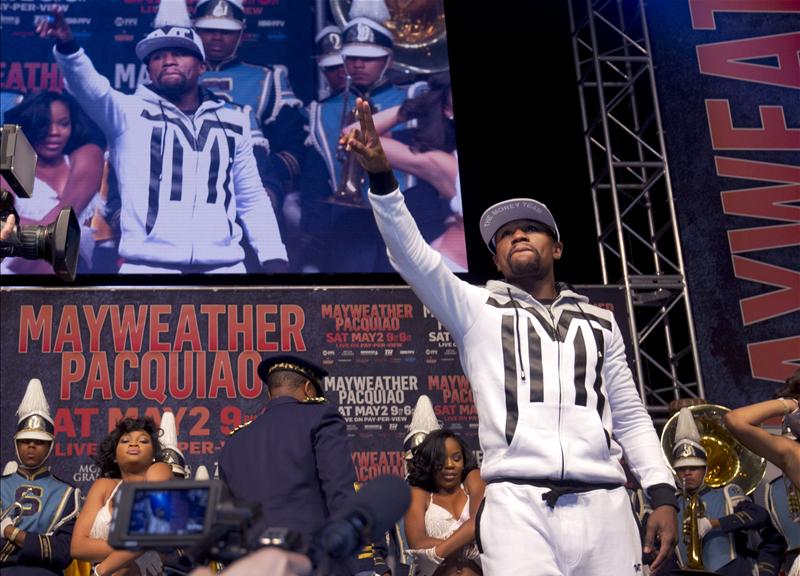 Mayweather not impressed by Manny Pacquiao for going solo at the Grand Arrivals, writes Matt Christie

“HEY, how you all doing today?” Floyd Mayweather Jnr asked as he took his seat in a studio within the MGM Grand Garden Arena. The highest-grossing athlete in the world, apparently set to add another $200m to his riches, was relaxed as he discussed the impending superfight against Manny Pacquiao with a cluster of journalists.

“I’ve broken records before,” he remarked about the size of this next assignment. “Are we going to do record breaking numbers again? Absolutely. I believe so.”

Mayweather has been a Box Office attraction since he thrashed Arturo Gatti in 2005. Subsequent victories over the likes of Oscar De La Hoya (2007), Ricky Hatton (2008) and more recently over Saul “Canelo” Alvarez (2013) have drawn obscene levels of revenue. Manny Pacquiao, of course, is the most appealing opponent of them all, and arguably carries a greater threat than any of Mayweather’s previous enemies.

But if Floyd is concerned about the danger that Manny brings, he did a wonderful job of hiding it. There was an assured confidence fuelling his every word that makes it hard to pick against him on Saturday night.

“For 19 years and 47 fights they have tried to be aggressive,” he said about the marauding Pacquiao’s possible tactics. “If that’s the game plan, well, we’ll see.

“I truly believe I’m the smarter fighter,” Mayweather continued before referencing the Filipino’s brutal 2012 knockout loss to Juan Manuel Marquez – the great Mexican who Floyd almost effortlessly dominated three years before. “He [Pacquiao] would be a better fighter if he wasn’t so reckless. He’s won a lot of fights by being reckless but getting knocked out in such a harsh way can affect a fighter in the long run.”

Mayweather has refused to trash talk in the build-up to this showdown, claiming he has matured from his days when he would harass his rivals before beating them up. But he was clearly irked by Pacquiao’s decision to stage his arrival separately at the nearby Mandalay Bay. Traditionally fighters would enter the same venue together at this point of fight week.

“If we turn the table and look at the situation,” Mayweather said while spinning one of the many dictaphones in front of him to illustrate his point. “If I got knocked out by [Juan Manuel] Marquez this fight would never have happened. If I didn’t turn up to the Grand Arrivals [alongside Pacquiao] it would be front page [news]. It’s different standards. The bar is at a totally different level.”

Mayweather has been accused of avoiding Pacquiao in the past. Much of the blame for this showdown not happening until now (it was first discussed in 2009) has fallen at the American’s feet – perhaps unfairly. But there was an insinuation that the delay has been very carefully calculated, that it was all part of the Mayweather Master Plan.

“Al Haymon was at my house and I thought about my whole career and the different investments,” Mayweather remarked about the moment he decided to fight his long-term rival. “I thought I can have two fights or I can fight this guy [Pacquiao]. I was calling Al every day to get the fight made.

“Five years ago this was a $50m fight for me and maybe $20m for Pacquiao,” he said. “Ain’t Floyd Mayweather the smart one?”