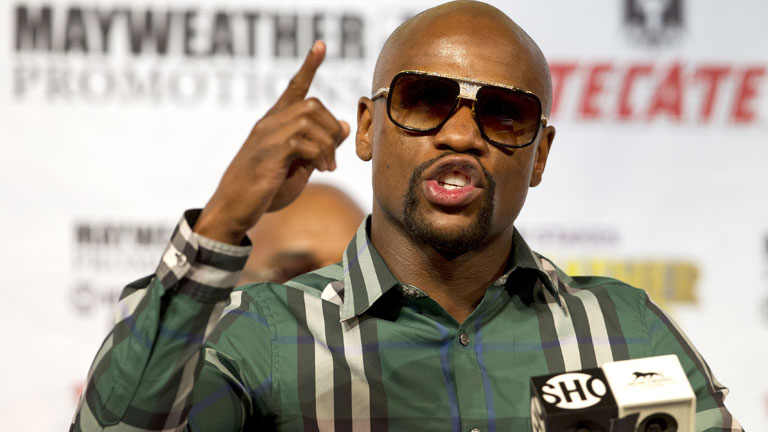 FLOYD MAYWEATHER continued his bizarre war of words with UFC star Conor McGregor this week by posting a video online mocking the Irishman.

McGregor suffered his sole UFC loss earlier in the year when Nate Diaz forced him to tap out in March, and Mayweather uploaded an edited video to his Instagram of the defeat, while offering $10,000 to the follower who thinks of the best caption for the clip.

The video ends with a caption reading: ’49-0 vs Connor [sic] the Notorious Quitter’.

Later on Wednesday Mayweather used Instagram Live to continue his verbal assault on McGregor, referring to him as ‘Conor McTapout’ and vowing “I’m gonna slap the s*** out of McGregor when I see him.”

McGregor caused a stir a few weeks ago by obtaining a professional boxing licence in California – a state Mayweather did not box in during the second half of his career – which sparked speculation that he was preparing for a shock code-switch.

Mayweather retired from boxing last year after easily outpointing an overmatched Andre Berto, bowing out with a perfect 49-0 record.

A few months ago the two money-making machines sent rumours about a potential fight between them flying with some cryptic posts on social media, but so far no progression of note has been made. The main hurdle is McGregor’s contract with the UFC, while Mayweather insists he is happily retired.

Though the fight would have huge crossover appeal, on paper it would be an enormous mismatch and would potentially not even be sanctioned by many athletic commissions in America.