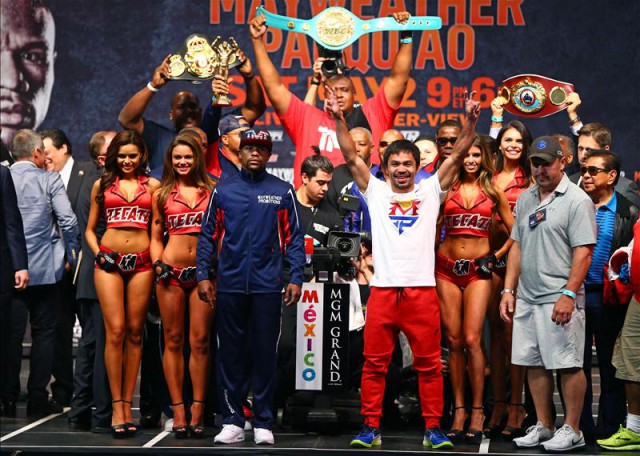 Matt Christie reports from Las Vegas on an exhilarating weigh-in

MANNY PACQUIAO, grinning like a child on Christmas Day, took a selfie before trotting to the stage at the MGM Grand Garden Arena. Euphoria oozed from the Filipino as he flung out his arms, waved to the 11,500-strong crowd on his way to the scales, and waited for Floyd Mayweather to join him. While Pacquiao is delighted to play the hero here in Las Vegas, his rival doesn’t seem as happy to be the villain.

Floyd’s face bristled with determination as he embarked on his journey, only to attempt a smile when he realised he was on the big screens. However, the booing that greeted his image soon straightened his mouth. It’s been a while since a visitor to Mayweather’s castle (this will be his 11th consecutive outing at the MGM) has been worshipped so vociferously – perhaps Ricky Hatton in 2007 was the last – and whether he cares to admit it or not, Mayweather is not remotely amused.

Some people have reported that Mayweather does not seem right for this contest, that maybe – just maybe – he is about to suffer the first defeat of his soon-to-be 48-fight professional career. His approach to war has been so outwardly carefree such thoughts are wholly understandable, but should be considered carefully. While a Pacquiao victory would be a feel-good story to match any in sporting history – from a fan’s perspective at least – don’t be fooled into thinking the threat that the ludicrously jolly Filipino brings is lost on Mayweather.

The 38-year-old American – who tipped the scales a pound heavier than his opponent at 146lbs – has been forced to deal with his plentiful achievements being constantly undermined by Pacquiao. Each Floyd victory since 2009 has been greeted with more questions about fighting Manny than admissions of the superlative nature of his own triumphs. Mayweather, at last, has the chance to silence his critics and, boy, what a spectacle it promises to be. Whatever one’s take on the outcome of showdown – or the drawn out saga that came before – it was hard not to be moved by the magic in the air today.

As an ardent heterosexual I never thought two men stripping to the waist would conjure such excitement, but I almost wept with exhilaration when the rivals, after five long years, at last went nose-to-nose. The press scoffed beforehand – myself included – that some punters had paid an astonishing $600 for tickets (face value $10) to this weigh-in but it’s unlikely anyone left the arena disappointed with what they had witnessed.

Pacquiao is perhaps the happiest of them all – he too has been waiting a long time for this – but lurking menacingly is Floyd Mayweather; the only man capable of wiping that infectious smile away.

DOWNLOAD YOUR ESSENTIAL COMPANION TO THE FIGHT OF THE CENTURY