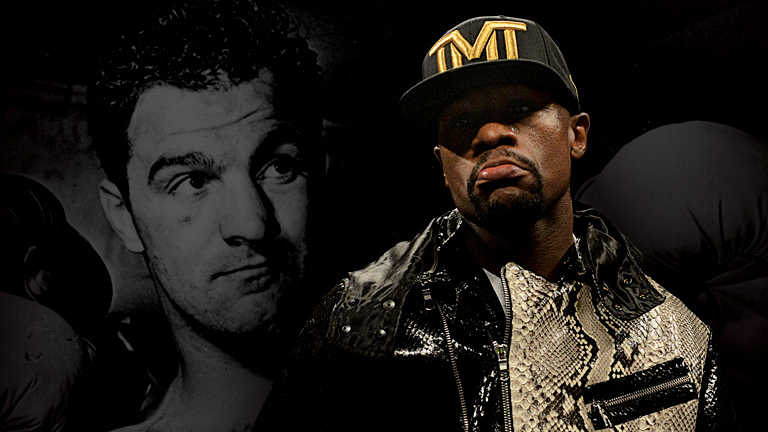 They're both 49-0 but Mayweather has had an easier ride than Marciano, writes Daniel Herbert

FLOYD MAYWEATHER equalled the record of Rocky Marciano by improving to 49-0, courtesy of a victory over Andre Berto in Las Vegas last September. Berto is a competent boxer but has lost three times to men much less accomplished than Mayweather.

Floyd has said it was his last fight, but I wouldn’t bet on it. This is professional boxing, where the truth is merely what you want someone to hear on any given day. Yet what if we took Mayweather at his word – how would he be viewed if he does bow out with a perfect ledger one short of the half century?

Mayweather has undoubtedly spent longer operating at world level than Marciano did. Rocky contested seven world title fights (all at heavyweight), between September 1952 and September 1955, a spell of three years.

Floyd has boxed 25 world title contests, more than half his career total of fights. He has held world crowns all the way from super-featherweight (130lbs) up to light-middle (154lbs), starting in 1998 – a whopping 17 years ago.

Over their entire careers, you’d have to concede that Mayweather has mixed with better opposition, and for longer. Why, then, is it so hard for boxing fans to rejoice in his achievements?

Well, the sport has changed considerably since Marciano’s day. Rocky spent the last couple of years of World War II serving in the US Army, had a limited amateur career and when he did turn pro, in 1947, it was in virtual anonymity. He did a lot of his early boxing in Providence, Rhode Island and small Massachusetts towns; it wasn’t until his 23rd pro fight that he got to fight in the boxing capital, New York City.

It was different for Mayweather. He won a bronze medal at an edition of the Olympics held in his US homeland (Atlanta, 1996) and turned pro as a budding star with promotional powerhouse Top Rank. He later split from them and has since become extremely wealthy planning his own career, but nobody can deny that Top Rank did a superb job in the early days. They gave him the right learning fights at the right time, with the result that he became world champ in only his 18th pro bout.

So Floyd hasn’t had to overcome the obstacles Marciano had placed in his path on the way to glory. And don’t forget that Rocky was boxing at a time when, to earn a title crack, you couldn’t just pick and choose who you fought, avoiding those you felt might trouble you.

The closest Marciano came to professional defeat was when he tangled with another prospect, the 37-0 Roland LaStarza, over 10 rounds in March 1950. Rocky came through via a close split decision and would later knock out LaStarza (11 rounds) in a world title defence.

Mayweather has benefited from a proliferation of weight classes and sanctioning bodies offering watered-down titles, allowing him to pick opponents at times (and weights) that suited him.

Marciano had one title defence that could be called “easy”, against Britain’s game but underpowered Don Cockell in May 1955. Four months later he had to get off the floor to knock out big-hitting light-heavy champ Archie Moore and, realising he was slipping, called it a day.

However you compare Mayweather and Marciano – and they’re both great fighters – nobody will ever confuse Andre Berto with Archie Moore. If Mayweather does reach 49-0 against him, he will have equalled Marciano in numbers only.