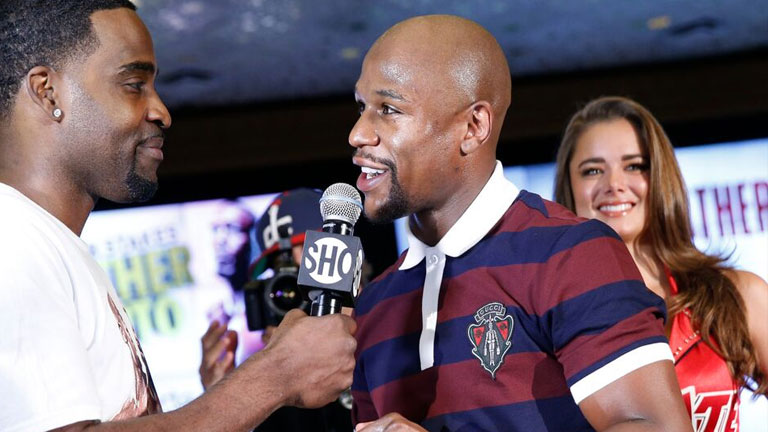 PHOTO (Esther Lin/Showtime): Mayweather addresses the crowd after arriving at the MGM Grand on Tuesday

FLOYD MAYWEATHER made a final battle cry ahead of Saturday’s fight against Andre Berto. The fight has been advertised as Mayweather’s last and the heavy favourite, wearing a slick green checked shirt, and sunglasses with diamond-encrusted frames, thanked an array of people for his career before indicating that his opponent has been spied on thanks to influential adviser, Al Haymon.

Berto smiled uneasily, and Mayweather left the podium to cheers from his team.

The contest – expected to be Floyd’s 49th straight victory – was widely viewed as anti-climax when it was announced six weeks ago. Mayweather defended Berto – a former WBC and IBF welterweight champion – as the choice of opponent over Amir Khan, the British fighter many thought deserved a shot.

“It’s not just intelligence [that got me here],” he continued. “It’s my sharp mind, great chin and strong heart. I push myself in camp to be the best I can be. I believe in my skills and I believe in my talent and the result is always the same.

“I always had a dreams and my dream was to be the best. I have never overlooked anyone. Boxing always came first. At 4.30 in the morning when my opponent is sleeping I’m working. When he gets up, I’m still working. No matter what the writers say I don’t read it anyway. No fighter in history has beaten more world champions than I’ve beat.”