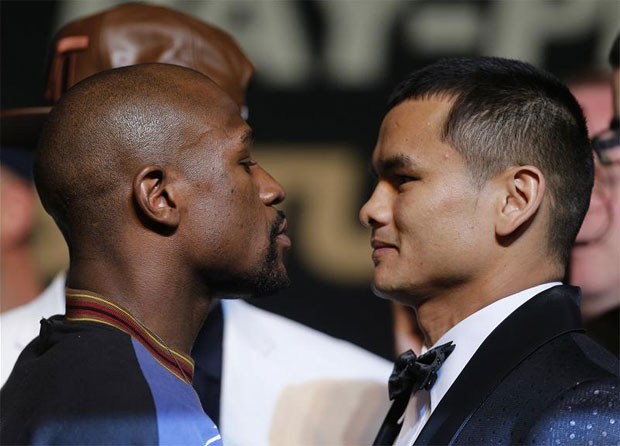 Ticket information and information about an upcoming five-city, cross-country press tour starting this Monday, July 14 will be announced shortly.

Despite the brutal nature of their first meeting, Mayweather has chosen to give Maidana a chance to redeem himself and earn a victory against the undefeated champion by facing him again in the storied MGM Grand Garden Arena.

“Marcos Maidana is a tough customer and he gave me a fight that had me work for the victory,” said Mayweather. “His style is difficult at best, but with experience comes a way and will to win. I’m not one to give second chances in the ring, but I want to give the fans what they want to see. I will be as prepared as I always am when I step in the ring on September 13. I only see the outcome one way and that’s another successful night for me and my team.”

“The rematch with Mayweather is the only fight that really motivates me,” said Maidana. “I feel I earned it in the ring and Floyd owed it to me. I’ve already proved that I don’t care if the man I have in front of me is the best pound-for-pound champion. I was close to ending his reign last time. On September 13 he will not get away undefeated.”

“This will be another great test for Floyd as Marcos Maidana is hungry to prove he can not only give Floyd a good fight, but redeem his loss and hand Floyd his first defeat,” said Leonard Ellerbe, CEO of Mayweather Promotions. “Maidana is clearly one of the best in the division and earned this opportunity to face Floyd once again. But that is a big mountain to climb and Floyd will be prepared as he always is to prove once again why they call him TBE, the best ever. It will be another great fight and action-packed evening for the fans.”

Stephen Espinoza, Executive Vice President and General Manager at Showtime Sports said: “On May 3, the fearless Marcos Maidana attacked Floyd Mayweather with reckless abandon, landing more punches than any previous Mayweather opponent and giving Mayweather one of the toughest fights of his career. That peformance earned Maidana this rematch, and we are in for another electrifying night of boxing.”

“The first fight between Floyd Mayweather and Marcos Maidana was incredible and it’s an honor to have the opportunity to host the rematch at MGM Grand,” said Richard Sturm, president of Sports and Entertainment for MGM Resorts International. “These two world-class athletes put on a spectacular show in May and will do so once again in September when they step into the ring.”

“Mayhem: Mayweather vs. Maidana II,” a 12-round world championship bout for Mayweather’s 147-pound titles taking place Saturday, September 13 at MGM Grand in Las Vegas, is promoted by Mayweather Promotions and Golden Boy Promotions and sponsored by Corona. The event will be produced and distributed live by Showtime PPV and is the fourth fight of a lucrative six-fight deal with Showtime Networks.

Their first meeting, “The Moment: Mayweather vs. Maidana,” was an epic 12-round showdown that ended in a majority decision (114-114, 117-11, 116-112) in favor of the pound-for-pound champion Mayweather. Maidana came out of the gate with his trademark wild style, making Mayweather uncomfortable and keeping him on the ropes in the early rounds of the fight. Using his typical animalistic style, Maidana attacked Mayweather with punches from all angles and by the end of the night, had landed more punches on Mayweather than any other opponent Mayweather faced throughout his undefeated career.

Undefeated Floyd “Money” Mayweather, (46-0, 26KO), an 11-time world champion in five weight divisions, is boxing’s biggest star and its undisputed pound-for-pound champion. His speed, defensive prowess and ability to read his opponents have carried him to 46 victories over his already legendary career. Prior to the aforementioned exhilarating first fight between Mayweather and Maidana, Mayweather had already faced boxing’s most feared opponents and been a part of its biggest events.

He solidified his worldwide popularity when he faced then-undefeated boxing phenom Canelo Alvarez last September. The mega-event, which set the record as the highest grossing pay-per-view event in television history with over $150 million in revenue, showed once again that Mayweather’s drawing power is unlike any other. During Mayweather’s extraordinary career, he has amassed wins over numerous world champions, including Arturo Gatti, Zab Judah, Oscar De La Hoya, Ricky Hatton, Juan Manuel Marquez, Shane Mosley, Victor Ortiz, Miguel Cotto, Robert Guerrero, Alvarez and most recently Maidana, marking his 46th win.

The Grand Rapids, Mich., native, who fights out of Las Vegas, averages more than one million pay-per-view buys per event, which is the highest pay-per-view buy average of any boxer in history, and is the only fighter to participate in two events which generated over 2 million pay-per-view buys each. In 2007, Mayweather co-headlined a pay-per-view event with De La Hoya, which generated the largest number of PPV buys in history. Mayweather has continued to rack up the accolades since defeating Maidana in May, as he has been named the world’s highest-paid athlete by Forbes and Fortune/Sports Illustrated for the last calendar year and nominated for “Best Male Athlete” and “Fighter of the Year” at this year’s ESPN ESPY Awards.

Thirty-year-old Marcos “El Chino” Maidana (35-4, 31 KOs) put on a show this past May when he stood toe-to-toe and challenged the king of boxing, Floyd Mayweather, before losing a majority decision that left the MGM Grand Garden Arena and sports world buzzing. More people than ever were able to gain an appreciation for the soft-spoken Argentine brawler with this great pay-per-view performance that earned him another shot at Mayweather. Maidana put himself on the map when he stunned the boxing world in December 2013 with a dominant victory over up-and-coming superstar Adrien Broner.

Hailing from Margarita, Santa Fe, Argentina, Maidana first emerged on the world scene in 2009, when he won the interim WBA World Championship with a stunning sixth-round technical knockout over Victor Ortiz. After three defenses of his title, Maidana lost a 2010 Fight of the Year candidate to Amir Khan, but he regained the belt with another classic against future Hall of Famer Erik Morales in 2011. In 2012, Maidana joined forces with renowned trainer Robert Garcia (2012 Trainer of the Year) and has since gone 4-1 with three knockouts with his only loss coming at the hands of Mayweather.