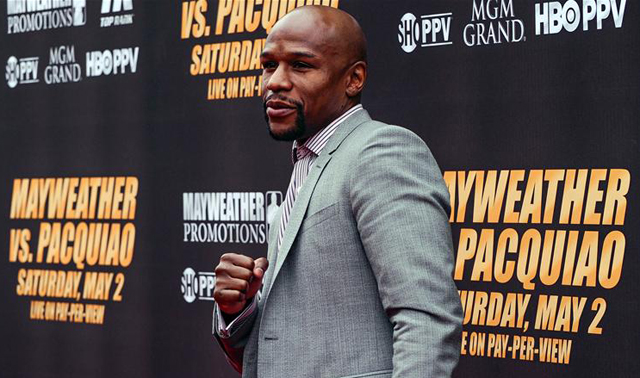 FLOYD MAYWEATHER has taken to social media to once again flaunt his wealth and insist he is not making a return to boxing.

The 39-year-old retired last year with a perfect 49-0 record and hundreds of millions of dollars in career earnings, though rumours continue to swirl that he will box in a 50th contest.

However, earlier today ‘Money’ moved to put the speculation to bed by posting a picture of the $100m cheque he earned for his decision win over Manny Pacquiao last year.

Gotta love these backseat drivers so worried about another man’s legacy instead of trying to write their own. Ultimately, I will always have the last laugh. This is just one of my many checks, a cool $100,000,000.00 that I still have every dime of. Y’all still have to work however, I’m happily retired. At the end of the day, it’s them Benjamin Franklins that matter to me, so the jokes on you. I’ve made smart investments, sorry for those who thought that I couldn’t read, write, or count. Y’all call them watches, I call them time pieces. Y’all call them boats, I call them yachts. Y’all call them houses, I call them mansions. Y’all charter jets and we own jets. #TMT

It isn’t clear if Mayweather is referring to his detractors in general, or if he has a specific target in mind. UFC star Conor McGregor has called Floyd out on numerous occasions, prompting Mayweather to dismiss any comparisons between the two.