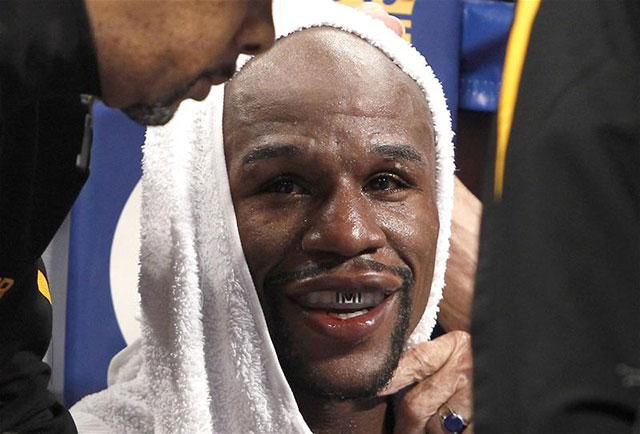 WITH less than a fortnight to go before Floyd Mayweather goes to war with nemesis Manny Pacquiao, Mayweather has stated he believes he is a better fighter than legends Muhammad Ali and Sugar Ray Robinson.

“No one can ever brainwash me to make me believe that Sugar Ray Robinson and Muhammad Ali were better than me,” Mayweather told ESPN. “But one thing I will do, I’m going to take my hat off to them and respect those guys that paved the way for me to be where I’m at today.”

Mayweather, 38 years old and unbeaten in 47 bouts, has won versions of world titles from super-featherweight all the way up to light-middleweight. The American is unquestionably one of the best fighters of his era but his latest comments are certain to anger historians.

Mayweather referenced Ali’s timeless victory over George Foreman in 1974 – specifically the famous ‘rope-a-dope’ technique – as justification for Ali being overrated.

“Take punishment and let a man tire yourself out from beating you? You hit him with a few punches and go down and quit and you want to be glorified for that?”

Floyd – who will take on Pacquiao in what is set to be the richest fight in boxing history – also mentioned Ali’s 1978 loss to Leon Spinks that came towards the end of “The Greatest’s” career.

“Leon Spinks only had seven fights,” he said. “Never put a fighter in there with Floyd Mayweather with seven fights.”