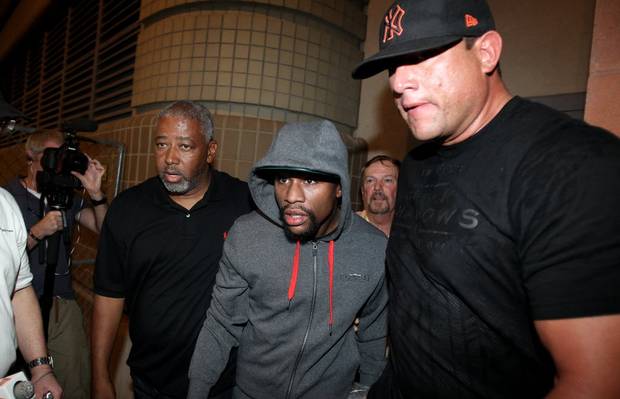 FLOYD MAYWEATHER has been refused a visa to enter Australia by their Immigration Department because of his history of domestic abuse against women. The superstar had hoped to enter to the nation to embark on a promotional tour but that has now been postponed pending an appeal.

The American, 37, was jailed in 2012 for an attack two years previous on his ex-girlfriend. Mayweather, who was found guilty of hair-pulling and arm-twisting, served two of the three-month sentence he was given.

“The Government takes very seriously its role in protecting the Australian community from the risk of harm by non-citizens who engage in criminal conduct and/or conduct that is of serious concern,” said Senator Michaelia Cash, Assistant Minister for Immigration.

There was a petition, led by campaigner Angela Burrows, against his possible entry.

“His assaults are sickening to read about,” she stated. “He’s alleged to have slammed a car door on a woman, then repeatedly punched her in the backseat. And he still seems completely without regret… Allowing a chronic perpetrator of violence like Floyd Mayweather to visit Australia sends a terrifying message – that vicious repeat abuse isn’t serious.”

Mayweather’s Australia-based representative, Max Markson, remains hopeful that the current visa issues will be resolved and the fighter’s tour can be rescheduled.

Markson believes that the unbeaten fighter will eventually gain entry because he has not offended for “almost four or five years and has become a bigger star in boxing, in fact he’s the highest paid sports star in the world.”

Two years ago, former world heavyweight champion Mike Tyson was denied entry into New Zealand before being granted a visa – with a warning to behave himself – to enter Australia.