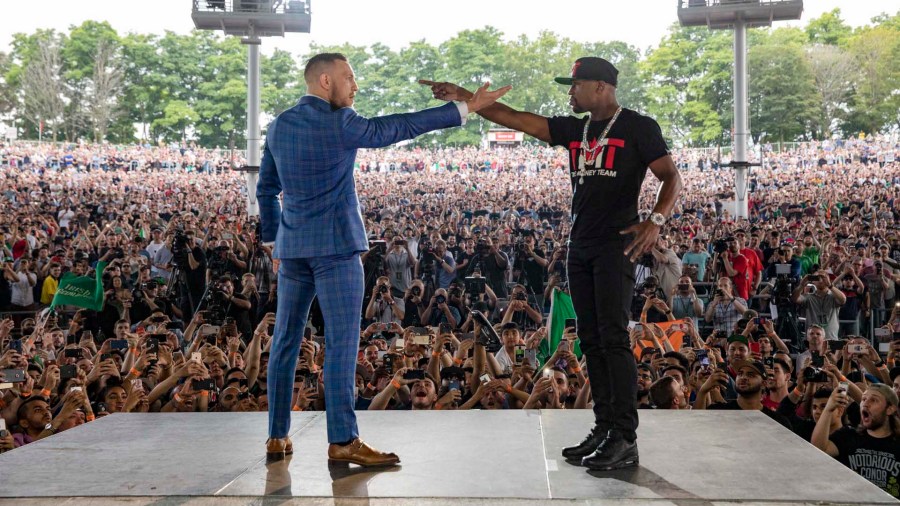 FLOYD MAYWEATHER and Conor McGregor continued to trade barbs at their second press conference in consecutive days. This time the two rivals faced off at the Budweiser Stage in Toronto, Canada on Wednesday.

Mayweather reminded McGregor of the gulf in experience between them. Floyd has been at the top of the sport for years. McGregor, an elite UFC fighter, has never had a professional boxing match.

“We’re not talking about being at the top for one year, two years, three years, four years. We’re talking about 21 years,” Mayweather said.

He suggested McGregor might retire during their August 26 12-rounder. “Turn the pressure up. I don’t quit, I don’t fold under pressure. I’m the best and I know I’m the best,” Floyd said.

The Irishman scoffed, “He tip-taps to a decision. He’s never fought a day in his life, he’s a runner.”

He continued, “Toronto, what a city. I was here one time, I was also on a world tour. I was also facing an unconquerable quest. I was facing the best pound-for-pound fighter on the planet, Jose Aldo. They said the same things then as they’re saying now. They said I have no chance. They said I’m in over my head. They said [he] kicks too hard, too many weapons. The Irishman is going to fall short, he doesn’t stand a hope.  It took me 13 seconds.

“I thrive in uncomfortable positions. There is nothing these guys can do to phase me. Twenty-eight years of age, I’m getting fight checks and promoter checks.  When Floyd was 28, he was on Oscar De La Hoya’s undercard and that’s just facts.”

Finally he warned, “One shot is all it takes. Check the facts. I bounce heads off the canvas.”