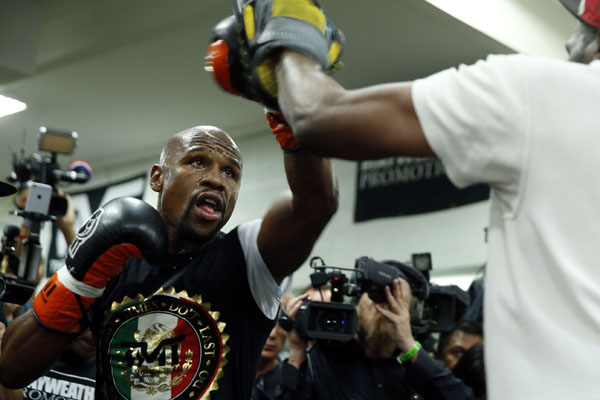 Mayweather discusses his approach to the showdown with Pacquiao, writes John Dennen

FLOYD MAYWEATHER may be the key element in boxing’s most lucrative fight when he meets Manny Pacquiao at the MGM Grand on May 2. But “Money” has maintained a deliberately low key approach. “I’m not really going crazy. It’s just a fight to me. I know it’s the biggest fight in boxing history, but I can’t approach it like that because I’m not going to put any unnecessary pressure on myself,” Mayweather explained. “It’s just another fight. I just look at the situation. He’s another guy that I faced. You’re just going to say in history, that these two faced each other at one particular time. It was hard to make the fight happen, eventually they made the fight happen, and we faced each other.”

“My focus is to give the people what they really want to see,” Floyd suggested. “Just facing the facts. That’s what I’ve done throughout my career. He’s one of the last guys, he’s one of the last good fighters of this era. It’s a fight that has to happen and I’m glad that the fight is happening.”

Mayweather however was not overflowing with praise for his antagonist. “Well, he’s got to this point by doing something right. It’s obvious he’s done something right to get to this point. I have to respect that,” he said of Pacquiao. “He’s a fighter that’s extremely talented, he’s a very good fighter also, and my thing is just to be Floyd Mayweather. People actually don’t know – how is this fight going to be fought? I can’t say. Like I said before, I’m not a psychic. I cannot predict the future. But I will be at my best May 2.”

Mayweather hinted too that he expected to be the larger, more powerful man in  the ring and he suggested that he’s already seen doubts seep into Manny Pacquiao. “Normally when I face an opponent, they normally outweighed me by 17 to 20 pounds on fight nights. This has been going on for a good while now. You can read a guy’s body language. When Pacquiao first saw me in Miami, he didn’t expect to see me over there at the basketball game. He looked shocked, like, ‘Damn, he is taller than me.  He’s bigger than what I thought he was.’ Just being in the sport for so long, you’re able to read body language; you’re able to read a fighter’s eyes,” Mayweather said.

Only time will tell. But Mayweather, as ever, is certain of one thing. “What’s my game plan? My game plan is to win,” he said. “That’s actually what my game plan has always been. To win.”