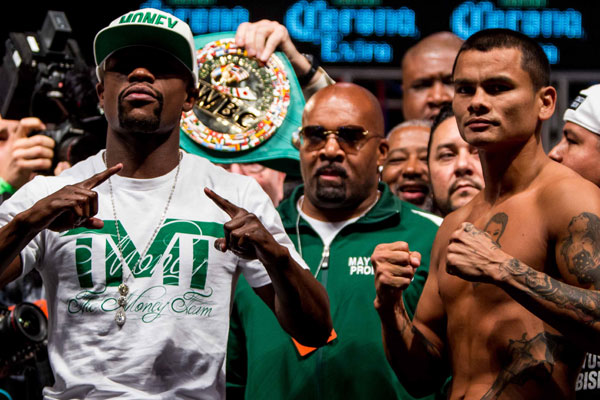 FANS queued for hours to get into the MGM Grand Garden Arena to witness Floyd Mayweather step on the scales for his rematch with Marcos Maidana. Showbiz oozed from the stage as rappers, dancing girls, and a line of world boxing champions kept the fans amused.

But in the end, it was just a weigh-in. Maidana tipped the scales at 146 ½ pounds, and Mayweather – looking typically ripped and ready – came in at 146.

Mayweather dutifully thanked his loyal army of supporters afterwards, managing to inject his gratitude into every answer he uttered from Showtime’s Jim Gray’s questioning. Maidana, fleshier than his rival, kept his fans happy by looking typically psychotic.

Despite the masses of fans who were in attendance, thought to be around 8,000, the feeling that this is an easy fight for Mayweather is stifling any real excitement. That said, several insiders are whispering that this could, in fact, turn out to be Floyd’s hardest battle, that his advancing years, and out-of-the-ring problems, are just a day from catching up with him.

A Maidana victory seems unlikely, particularly when one considers how gifted Mayweather is in defence, and importantly, how he can adapt in battle. No one does it better than Floyd, and crucially, the adjustments he made in the second half of the first fight – that resulted in virtual domination down the stretch – may not be required this time now he knows exactly what to expect.

Whatever happens, a vintage masterclass from the game’s best fighter, or further evidence of erosion, makes the contest far more enticing than some are suggesting.