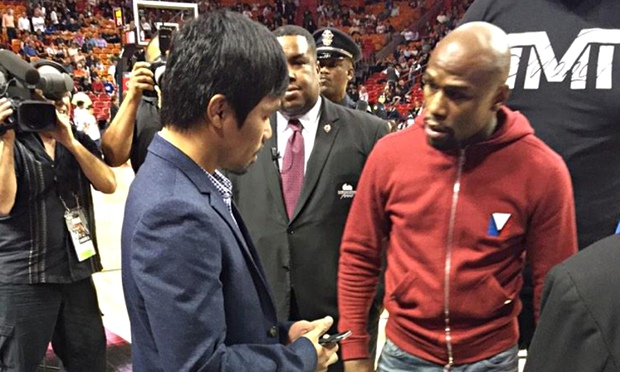 BASKETBALL has succeeded where boxing has failed and brought Floyd Mayweather and Manny Pacquiao together for the first time.

The welterweights both attended the Miami Heat-Milwauke Bucks game on Tuesday night, and sat facing each other, on opposing sides of the arena. At half-time, the two fighters came together for a brief discussion.

“He gave his number to me and said we will communicate with each other,” Pacquiao said, according to The Associated Press.

The Filipino had never before met Mayweather – despite appearing on Floyd’s undercard in 2001 – but they have spoken on the phone.

The rivals have been linked together for many years. The subject of a fight between the pair has grown tiresome due to their incessant failure to agree terms but hopes were raised – yet again – this year when both indicated they wanted the fight.

Negotiations are believed to be ongoing but rumours are rife that world middleweight boss Miguel Cotto – whom Mayweather decisioned in May 2012 – is ready to step in and fight the unbeaten American instead.

An announcement is expected in the next few days.

BOXING NEWS has been your loyal companion since 1909. DON’T MISS OUT.