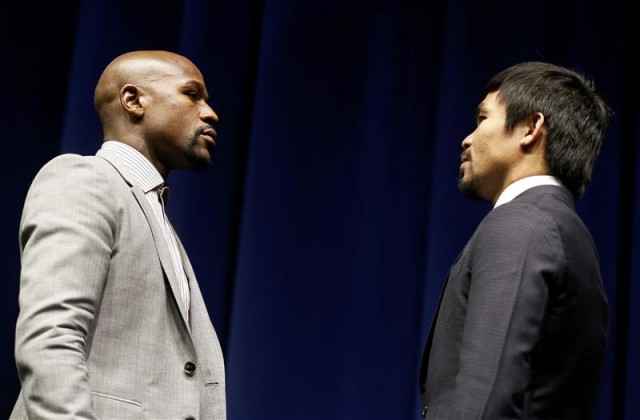 Mayweather and Pacquiao go head-to-head at their only press conference in the run up their unification battle, writes John Dennen

FINALLY, as they prepare for a fight that’s been five years in the making, Floyd Mayweather and Manny Pacquiao came face-to-face at the Nokia Theatre in Los Angeles today for a press conference, the first and only one in the run up to fight week.

With a red carpeted entrance, over 600 members of the media in attendance, the press conference itself was an indication of the scale of their May 2 clash. The fight will unify WBC, WBO and WBA welterweight titles but beyond that it pits the two pre-eminent fighters in the world today against one another. Many thought this day would never come but, with Michael Buffer doing the honours to announce Pacquiao’s press conference entrance (yes, this fight is so big even fighters even get a press conference entrance) and Jimmy Lennon Jnr calling in Mayweather, the two men, at long last, stepped up on to the stage to face each other.

They stared at one another for what felt like an uncomfortably long period of time, before turning to the cameras to stand side by side. Pacquiao smiled faintly, while Mayweather remained expressionless.

They took their places on the dais and, after lengthy introductions, finally spoke. “I believe this is what you’ve been waiting for since five years ago,” Pacquiao said. “The fight is on and I know you’re very excited. We’re both of us undergoing hard training for this fight and we will do our best on May 2 to make you happy.”

When Mayweather stepped forward to address the cameras there was note of emotion in his voice, maybe even weariness as he spoke slowly. “It’s been a long road. But we’re here now,” he said. “May 2nd. The fight of the century. It’s all about the best fighting the best and Pacquiao is one of the best fighters of this era.

“Everything is about timing. We couldn’t choose a better time. Our game plan is just to be smart and take one fight at a time, like all 47 fights. This is a fight that the world can’t miss. This is an unbelievable match up. An action packed fight. I’m in the gym working right now, dedicating myself to the sport, pushing myself to the limit. Because I’ve never wanted to win a fight so bad in my life.”

YOU CAN KEEP UP TO DATE WITH OUR MAYWEATHER VS PACQUIAO NEWSLETTER TOO. SIGN UP HERE