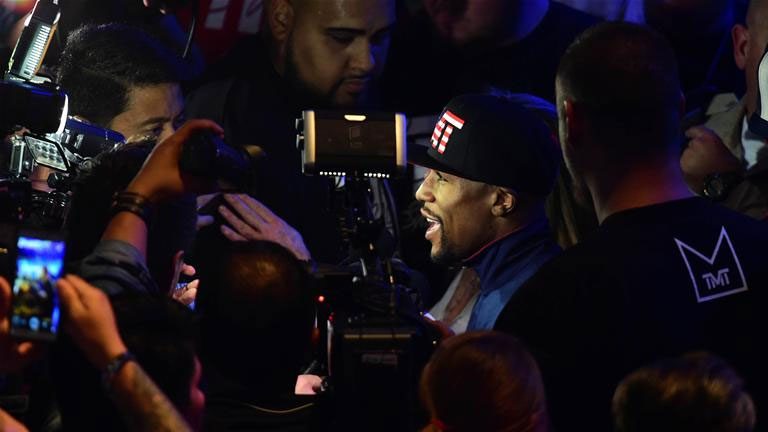 FLOYD MAYWEATHER and Andre Berto did a decent job of making tomorrow night’s showdown reasonably appealing at Friday’s weigh-in at the MGM Grand’s Garden Arena in Las Vegas. The contest has been the source of much derision in the media but the challenger to the WBC and WBA welterweight titles has an air of confidence that belies his perceived chances.

Weighing 145lbs, two pounds lighter than the champion, Berto mischievously studied both sides of Mayweather’s face during the staredown, talking as he moved around the heavy favourite. Floyd, as is custom, chewed gum at a frantic pace.

The bout has been advertised as 48-0 Mayweather’s final appearance and the Sin City resident has shown no signs of going back on his retirement plans.

“That was the last time I’m ever getting on scale,” Mayweather said afterwards. “I want to thank all the fans that are sitting here. It’s always easy for me to make 147lbs.

“I want to give the fans some excitement tomorrow night. For 18 years I have been world champion, I have faced everybody, I have faced all the best names.”

Berto – a 25-1 underdog with some bookies – has been growing in confidence since the contest was announced six weeks ago. Written off by virtually everybody, largely due to his failure to win three of his last six fights, the underdog was in typically immaculate condition.

Unlike May’s fight between Mayweather and Pacquiao, fans are struggling to get excited about this matchup and only half of the arena was open for this weigh-in – and there were still empty seats.

After Mayweather, the most popular fighter hitting the scales was George Groves, whose fans sounded like they outnumbered those of Badou Jack – a member of the Money Team – whom the Londoner will challenge for the WBC super-middleweight title.

“We’re feeling good,” said Groves, 168lbs, who was visibly impressed by his reception. “Jack is out of his depth. I’m going to strut my stuff and I’m a better fighter in every aspect.”

Jack, weighing half a pound less, is determined to keep his title.

“The fans can’t fight for him,” he said. “Nothing about him concerns me and I’m ready for war.”