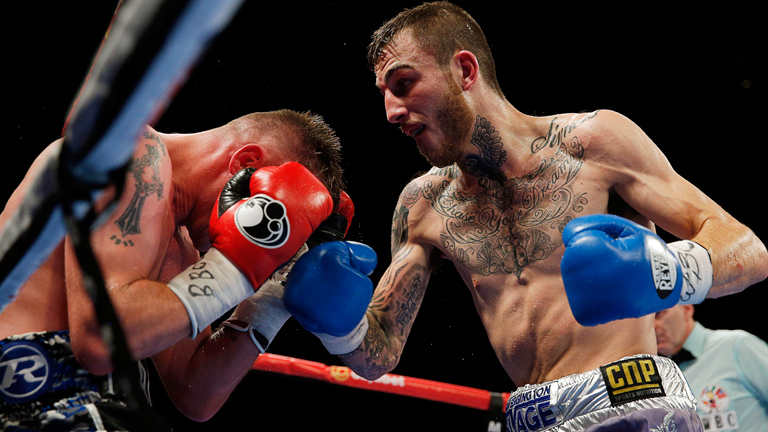 Amateur success does not guarantee the same in the pro game

Two former GB amateur standouts suffered losses at the weekend. Britain’s first ever world amateur champion Frankie Gavin was dropped and stopped by a marauding Sam Eggington in Birmingham. It was the third loss of Gavin’s pro career, so the idea that his amateur exploits meant little in the paid game was not a new one. He displayed exceptional shot selection and timing, but his lack of power and conditioning meant Eggington, the bigger man, could walk him down and dictate the pace. For all his class and amateur pedigree, Gavin could not hold off the relentless Eggington, who put in an inspired performance.

On the undercard Olympic bronze medallist Anthony Ogogo was stunned by Craig Cunningham. Boxing against his first ‘live’ opponent, Ogogo had no answers to the questions southpaw Cunningham was asking. He was dropped in the second and always second best in the exchanges. Halfway through the eighth he was pulled out by his corner after complaining about blurred vision. It was absolutely the right call, though the loss was another example of just how different professional boxing is to the amateur game.

Josh Taylor is the real deal

However up in Scotland another amateur standout, Josh Taylor, put in a phenomenal performance to stop Dave Ryan and win the Commonwealth super-lightweight title – in just his seventh pro outing. The unbeaten Scot dazzled in front of the Edinburgh crowd and did to Ryan what no one has done before him. It was, on paper, a major step up for Taylor but all it did was bring out even more ability in him. The finishing shots were world class and prior to the stoppage it was one-way traffic. With an 100 per cent KO ratio, Taylor looks set to be a big star for Scotland and could be walking onto the world stage within a couple of years.

They make them tough in Brum

We’d been waiting a year for Eggington-Gavin after it was postponed in 2015, and it was worth the wait. With local pride on the line, the two Birmingham lads went hell for leather from the get-go. Eggington’s aggressive style forced Gavin to engage in a firefight. Hurt at several points, Frankie had no choice but to bite down on his gumshield and trade with Eggington, and it made for some breathtaking action in the sixth round, which could be the round of the year. Both men displayed stern chins and unwavering bravery as they put on an absolute treat for their home fans.

Cunningham, another Brummie, showed how dangerous he can be against Ogogo while Kal Yafai set up his WBA world super-flyweight title shot with a destructive win over Johnson Tellez.

The heavyweights are in a mess

The boxing world has been waiting for days to hear what the WBA’s decision will be over their heavyweight title. Everyone – outside of Lucas Browne’s team – wants them to sanction the mooted Anthony Joshua vs Wladimir Klitschko superfight, but they keep delaying their decision.

Klitschko should not be placing so much value on a title he has previously held, especially if it means walking away from a mammoth payday and a blockbuster event against former sparring partner Joshua. The WBA should also not take so long in making their decision. Klitschko was set to box Tyson Fury for their title anyway, and having it involved in a unification fight with IBF champ Joshua is not exactly against their rules. However a unified champion does mean they can milk less money out of their trinket, which is bad news for anyone wanting Joshua-Klitschko.

Their delayed decision leaves the division in a state of flux as contenders like Browne and David Haye wait to confirm their next moves. Things looked so promising when Fury blew the division wide open last November, but now the waters are muddier than ever.

Aside from the action and the heavyweight carnival, Carl Frampton popped up to announce that he will rematch Leo Santa Cruz. The pair were engaged in one of the fights of the year a few months ago, when Frampton outpointed Leo to lift the WBA featherweight title and become Northern Ireland’s first ever two-weight world champion.

It looks like they will meet in Las Vegas in January – huge news for both. In stark contrast to the heavyweight troubles, the rematch looks like it was made with relative ease. It’s another five star matchup for the Ulsterman, who beat Scott Quigg earlier this year.

Should he cement his position as one of the finest fighters on the planet with another win over Santa Cruz, Frampton will look to more huge fights at featherweight – and, perhaps, beyond.