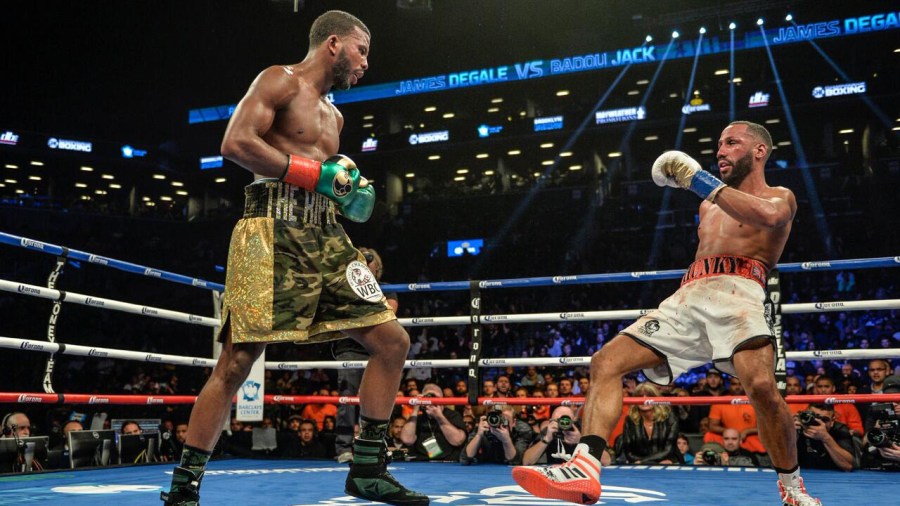 There is plenty of substance beneath James DeGale’s style

At times during his super-middleweight unification clash with Badou Jack, James DeGale was his usual balletic self, nullifying Jack’s forward momentum with fluid movement and fast punches. However he was eventually dragged into a war of attrition, and had to ask himself questions he had previously never had to deal with.

However he answered them with gusto, refusing to budge as Jack built up a head of steam and piled on the pressure. In the final round, DeGale somehow dragged himself from the depths of despair after Jack floored him heavily and survived until the final bell, even clocking his man with some meaty shots before the end of the fight.

Though he was unable to unify the division, DeGale’s stock rose considerably – though fights that hard take a lot out of a fighter.

Badou Jack can never be written off, even at light-heavyweight

DeGale-Jack was an incredibly well-matched fight, but even so, most expected DeGale to win. Not only was he the betting favourite, but most insiders and experts tipped him to win. Yet again Jack, so often the underdog, proved he should never be overlooked.

He is often described as a ‘solid’ fighter who doesn’t excel in any one department, but he always seems to rise to the occasion. Now, he intends to move to light-heavyweight, where the likes of Adonis Stevenson, Sergey Kovalev and Andre Ward operate. He would be a heavy underdog against any of those three – but that’s never stopped him before.

For super-middleweight contender Callum Smith, Jack’s decision to move up provides new opportunities. The WBC title would become vacant, and Smith – the mandatory challenger for the belt – would be looking at a fight against former champion Anthony Dirrell for the title.

Gervonta Davis is a star in the making

On the DeGale-Jack undercard, Floyd Mayweather protege Gervonta Davis dismantled previously unbeaten IBF super-featherweight champion Jose Pedraza inside seven rounds. The 22-year-old was competing in his first ever 12-rounder and was significantly less experienced than the Puerto Rican, but he bossed proceedings from the get-go, displaying fine skills to go with his concussive power.

Pedraza looked to be stemming the tide in the fifth, but Davis soon reestablished his dominance, completely shutting down Pedraza’s usually terrific jab and punishing the defending champion with hooks and uppercuts, before finishing him with a peach of a right hand. It was a dazzling performance and now with a world title in an outstanding weight class, Davis could go a long way.

After the main event in Brooklyn, Floyd Mayweather took centre stage and lambasted the judges for scoring it a draw, insisting that his man – Jack – deserved the victory. He event went so far as to say “this is bad for boxing.” It was a sad end to what had been a phenomenal night of fights. DeGale-Jack was very close and an enthralling affair; a draw was a fair verdict, and it should set up a rematch. However, Floyd and co. were quick to state that any return with DeGale, a comfortable super-middleweight, must take place at light-heavy, where Jack will now venture.

Sadly, Mayweather was drawing attention away from the success of his own promotion. The entire show had everything; upsets, potential fight of the year candidates, star performances and even a referee getting whacked. Mayweather’s post-fight tirade will likely remain a bitter footnote to the night as a whole, though.

In Florida, Cuban stylist Erislandy Lara defended his WBA super-welterweight title against a way past his best Yuri Foreman, winning in four rounds. He looked brilliant against the very limited challenge of Foreman, but he needs much sterner tests.

His record is by no means bare – he’s beaten Paul Williams, Vanes Martirosyan, Austin Trout, Alfredo Angulo and came very close to defeating Canelo Alvarez (plenty of people feel he deserved the nod). However he still needs a defining win, and he may need to move to a different weight class for it.

He wants a rematch with Canelo and has even mentioned middleweight boss Gennady Golovkin. He would give either one of them a tough night and perhaps that’s his problem; he is difficult to beat but doesn’t bring much money to the table. Regardless, his talent is wasted against the likes of Foreman.