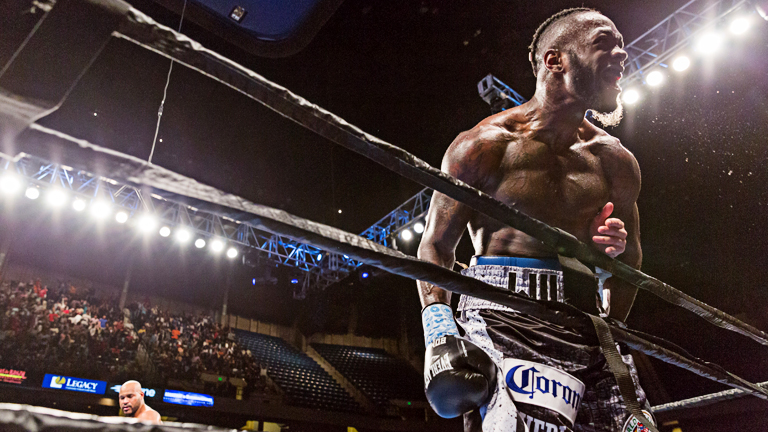 Deontay Wilder still has his equaliser

Returning from nasty hand and arm injuries, Deontay Wilder retained his WBC title against Gerald Washington. It was a flawed performance, but the unbeaten giant ultimately got the job done. Washington proved more difficult than advertised, winning several of the early rounds and giving Wilder plenty to think about. Then, Wilder found a home for his vaunted right hand and ended things in the fifth. Rough around the edges, Wilder isn’t everybody’s cup of tea but he’s definitely exciting and, once again, he violently removed any chances of an upset.

Dominic Breazeale is an action hero

He may not have a huge amount of ability, but American heavyweight Dominic Breazeale has a hell of a lot of heart. His see-saw scrap with Izuagbe Ugonoh on the Wilder undercard was awesome. He got off the floor to stop his man in the fifth, having previously dropped him in the third. Considering this was his first outing since being hammered by Anthony Joshua last year, Breazeale also showed some serious bounce-back ability. It’s unlikely he’ll ever win a world title, but he looks set to be in some more fun fights down the line.

Mexico’s Rey Vargas travelled to Hull and upset the party as he outpointed Doncaster’s Gavin McDonnell to win the vacant WBC super-bantamweight title. He came with a decent reputation which was further enhanced after he dominated the first half of the fight and weathered some difficult stages down the stretch to stamp his authority. Ian John Lewis’ score of 114-114 was abysmal and needs to be looked at, but Vargas was rightfully awarded victory by the other two judges and now has himself a world title.

Pacquiao and Khan are people pleasers

Manny Pacquiao and Amir Khan sent tongues wagging when they both confirmed that terms are agreed for them to meet on April 23 in a blockbuster clash. Some detractors point to Khan’s crushing loss to Canelo Alvarez last year and Pacquiao’s advanced age, but the fact remains that this is a great fight. Pacquiao was looking at Jeff Horn while Khan also wanted some sort of warm-up fight, so it is encouraging to see they decided to fight each other instead.

Smaller shows should never be overlooked

Frank Warren’s Queensbury Promotions staged a show at York Hall on Friday which, with all the world title action elsewhere, went under the radar. However, it produced two brilliant fights. Swansea’s Jay Harris took a marked step up in class and had to dig deep to relieve Thomas Essomba of his Commonwealth flyweight title. It was an enthralling battle, but Craig Poxton’s upset stoppage win over Boy Jones Jnr stole the show. The pair produced one of the best fights in a British ring so far this year – which could easily still be true come December – and Poxton pulled it out the bag to drop and stop Jones in the 10th and final round. Small hall shows don’t get much attention, but they can include some breath-taking fights.