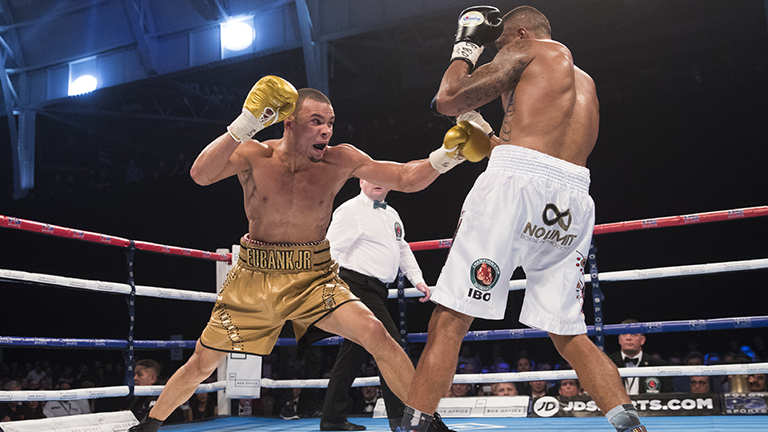 Ultimately, Chris Eubank Jnr did his job on Saturday night when he stopped Renold Quinlan in 10 rounds. It took longer than most people expected, but Eubank finished the rugged Australian inside the distance and continued his winning run. He holds the IBO title, but he is no world champion.

That’s not to say he won’t become one in the future, though there seems to be work needed at this stage. He has all the backing he needs in terms of promotion and TV coverage, but at times against Quinlan he looked raw and unrefined. Against someone like Renold, he could afford to over-extend and telegraph his shots, but should he take on some of the names  he frequently calls out, he could find himself in trouble. He is devilishly quick and always in fine fettle, but perhaps if he was smarter with his shot selection and sat down on his punches, they would have more of an effect. One of Quinlan’s assessments of Eubank Jnr is that he “has no power.”

Regardless, his aggression makes him exciting to watch and there is plenty of intrigue around the Brightonian.

Unsurprisingly, social media was chock-full of unecessary vitriol aimed at Liverpool heavyweight David Price after he suffered another stoppage loss at the weekend. Thankfully, Price and his team are a sensible bunch so they will pay no heed to the trolling.

More important is what Price does next. Only he will know what went wrong on Saturday to result in his fourth early defeat, and only he can address it. Whether that means making some changes, or walking away from the sport altogether, it is not a decision he should, or will, take lightly. If he does decide to retire, he can do so with pride having won an Olympic bronze medal as an amateur, and the British and Commonwealth titles as a professional. He always carries himself with grace and kindness, earning the respect and friendship of most who’ve encountered him though boxing – that is far more important than achieving a certain potential that others feel you have.

Andrew Selby is a bad man

Andre Ward might have said it best during his commentary on Andrew Selby’s win over Ardin Diale at the weekend when he described the Welsh flyweight as a “bad man.” In just his eighth professional fight, Selby put on a 10 round masterclass to display why he is one of the most highly-touted prospects in the UK.

In fact, many already consider him a legitimate contender. Now, Diale is no world-beater and he has been stopped in the past, but Selby oozed class as he won every round against him. His incredible amateur career means he does not need to be mollycoddled and having earned a WBC ranking with his win over Diale, it doesn’t look like his progression will be slow.

Miguel Cotto should seek out a big fight

If 2017 is to be the final year of Miguel Cotto’s illustrious career, he should put it to good use. A scheduled February 25 meeting with James Kirkland was not seen as a step in that direction, but the Puerto Rican warlord now has the chance to secure a much bigger fight. His clash with Kirkland was scrapped completely when James fractured his nose during sparring.

A fight with Juan Manuel Marquez was previously floated and would be well-received if they can agree on a weight (and purse split). Former middleweight champion Andy Lee is ready to return to action, and a fight between he and Cotto at Madison Square Garden would be huge.

In Tunica, Mississippi, former welterweight champion Luis Collazo stunned rising contender Sammy Vasquez. The New Yorker was seen by most as a vulnerable scalp for Vasquez to claim on his way to bigger fights under the Premier Boxing Champions banner. However, he chose to slug it out with the teak-tough Luis and paid dearly for it. Dropped in the third, Vasquez was then badly knocked out by a short right hand in the sixth.

Despite being 35 and having suffered numerous setbacks, Collazo is still a dangerous opponent at welterweight and by flattening Vasquez, he sent a warning to any other up-and-comers who may have been eyeing him up.