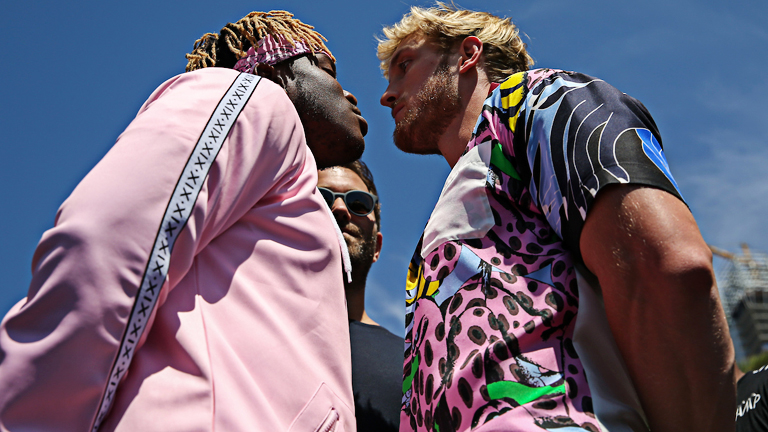 KSI vs. Logan Paul, a boxing match between YouTubers, has caused quite the stir, but is it worth watching? Elliot Worsell doesn't believe so

The following is an attempt to stop you watching a six-round fight between YouTubers KSI and Logan Paul. If you are more open-minded than the average boxing fan, and quite like the idea of seeing two modern day internet celebrities punch each other in the face, read this one instead.

Eight weeks of training (or, in Logan Paul’s case, “a year”) isn’t going to change the fact KSI and Logan Paul can’t fight a lick, as old-timers would say. It can make muscles bigger. It can inflate already sizeable egos. It can motivate them to talk mean. But it will take more than Shannon Briggs and protein shakes to learn how to stand correctly and throw a well-timed jab without falling over their front foot.

Watching a few seconds of them train is enough. The moves are consistent with what you would find during white-collar training, one notch above boxercise. You come away admiring the effort and commitment but believing the pair would be better suited to grabbing PlayStation controllers and settling their argument on Fight Night.

Worse than awkward movements, the words KSI and Logan Paul are using to hype the fight suggest neither have even watched boxing matches before. If you listen to them, they don’t talk like fans of the sport, much less fighters. They speak instead like total outsiders: the rugby fan who corners you in the office kitchen and tells you where Anthony Joshua went wrong in June; drunk friends chipping in for a pay-per-view and boring the room with tales of that one white-collar fight they had; the opinionated taxi driver; your mum.

This is not to say they need to carry themselves like Teddy Atlas, but they should at least pretend to know a little bit about what it is they’re attempting to do. At least work on impersonating a boxer.

2. It sets a worrying precedent

Rest assured, this won’t be the last of its kind. More likely is that it creates a new outlet for promoters and television networks eager to exploit variations on a theme. Beyond Saturday, expect to see a separate but wholly unofficial league (they will still call it pro boxing) catering for this kind of fun, allowing anyone and everyone, so long as they boast the requisite followers and pulling power, to glove up and make money.

First there will be a rematch between these two, then there will be fights between their relatives, coaches and any other interested bystander, before finally Prizefighter makes its long-awaited return in the form of eight YouTubers battling it out before thousands of hysterical kids watching the action through the cameras on their smart phones.

3. It does real boxers a disservice

Think of Nonito Donaire. Think of him when you’re contemplating giving your money to a couple of multi-tasking upstarts who have shed not a bead of sweat or speck of blood for the right to headline a boxing event at the Staples Center. Why Donaire, you ask? Because, on Thursday in Japan, ‘The Filipino Flash’ embodied everything special about the sport when pushing Naoya Inoue all the way, providing evidence, if it was ever needed, of why it shouldn’t be ridiculed by novices playing dress-up this weekend.

Yes, some boxers will capitalise on this experiment – chiefly, one or two on the undercard – but most will not. Advocates will read from the same script as the promoters to stay in favour, whereas the rest, the ones resigned to operating in the shadows, have not a single positive thing to say about it. They know, as we all know, that fights like this serve only to undermine what it means to be a boxer.

Boxing was once a profession only a special few could imagine doing, let alone do. But now it’s a free-for-all, open to anyone, dumbed down to such an extent it’s no longer viewed as the toughest sport in the world but instead a simple way to settle a spat and make money. To turn pro these days doesn’t require much more than a clean bill of health and a financially compelling reason for doing so. Offer that and you’re in.

Interestingly, a similar issue was explored in this video around the time Logan Paul’s brother, Jake, released a rap single in 2017. The argument here was that hip-hop culture had left itself exposed to such monstrosities because its growing popularity had diluted the overall quality of the product and allowed an increasing number of DIY rappers to think mumbling incoherent nonsense over a generic beat constituted music. So long as it made a quick buck, who cared about quality? The landlords didn’t care, nor did the cowboy builders. The rot set in.

In boxing’s case, KSI and Logan Paul are squatters. Boxing left the door open and let them in. For as long as the door remains ajar, more will arrive.

Some will say it makes a mockery of the sport. Others will say it’s what the sport deserves.

4. Money is the root of all evil

A line repeated ad nauseam when it comes to this fight is that it makes business sense and is therefore good for the sport. If you don’t understand this, you’re stupid, so the theory goes.

Be that as it may, I’m not sure how much of the money made from fights between YouTubers with impressive entrepreneurial savvy will be reinvested in the sport and put towards renovating its shoddy interior. Moreover, let’s not pretend dumb moves and reprehensible acts haven’t been and aren’t still being committed in the name of money and power.

The smartest move to make this weekend is to flip the script on KSI and Logan Paul and, like an expert counterpuncher, use their power against them.

Basically, depending on time zone, either enjoy a good night’s sleep and forget about a meaningless fight between YouTubers, or, if awake, use YouTube, the very platform that brought these two fighters to fame, to enjoy some of the greatest fights, proper fights, in boxing history. There’s a host of them out there, free to view, and all it will take is watching one of them for the first time, or rewatching an old favourite, to remember why you fell in love with boxing in the first place.

Failing that, revisit Inoue vs. Donaire, the fight of the year.