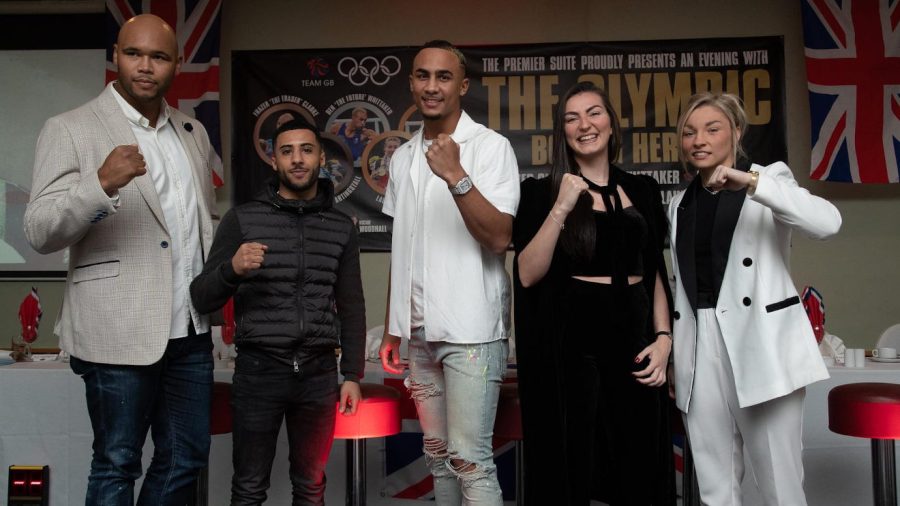 'This journey is not over.' Steve Bunce has an audience with five Olympic medalists and hears their extraordinary stories

IT might have never happened before – five friends and their five medals, all sharing their Olympic memories on one night. Galal Yafai, Lauren Price, Ben Whittaker, Frazer Clarke and Karriss Artingstall gathered at Cannock’s Bar Sport to relive every fight from the summer’s Olympic boxing. Richie Woodhall brilliantly walked them through each day of the boxing; the winners, losers, tears, relief and glory. The 2012 team never did anything like this. Never.

Woodhall eased them all back on their seats, made them lower their guard and got them all to talk openly, warmly, with fondness, respect, honesty and a lot of humour. It’s Woodhall who takes them on the pads inside the altitude tent as part of his role inside the GB set-up. It’s Richie they trust and he made an audience of 500 intimate.

There was talk of professional deals, of Peter McGrail’s first fight and of Caroline Dubois signing with Shane McGuigan. And little Charley Davison going to Paris. The five are looking at deals – they are all turning professional – and have had meetings, heard promises, had offers. The five have probably all made up their minds. “Getting together has given us a chance to swap notes,” said Clarke. However, the night was all about Tokyo and their medals and the adoring young fighters and fans on the tables at Scott Murray’s place.

“It’s at events like this that you realise how much winning a medal means,” said Artingstall. “There are so many young boxers coming up for pictures. It’s incredible.” All five were amazed at the adoration and there seemed to be an endless stream of 13-year-old girls from local boxing clubs.

Clarke told the story of his medal fight, the ugly one with the Frenchman, Mourad Aliev, and he did it in style. “I don’t like him, he don’t like me, we had to be pulled apart in sparring, but if he’s going to butt me, try and not let the ref see it,” said Clarke. “That’s eight cuts in four fights with him; I went into the semi-final with 18 stitches and against Jalolov, that’s no good.”

Whittaker had total recall of his five fights, a living memory, starting with his second fight.

“Against the Egyptian, the first thing I saw was that he was not very tall and then I saw that he had on running shoes,” Ben insisted. “I said to myself: You can’t lose to a guy wearing running shoes.”

Then it was the Brazilian, Keno Machado, and for Whittaker there was pressure: “Before my quarter with Machado, I was hitting the pads and Pat [McCormack] came back. He had just secured a medal and I thought, ‘Man, this is real now.’” It was, he won 3-2 for the medal and then it was the dangerous Russian, Imam Khataev.

“When I knew I had the medal I came out of the ring and I was crying a little bit,” Whittaker started to explain, but Galal cut in: “A little bit?”

“Against Khataev I thought, if he can’t hit me, he can’t beat me. It was hard on paper, but it was my easiest fight,” added Whittaker. “I loved the final, it was a dream come true. I lost to the better man.”

Galal, Frazer and Ben had an early sign of what it means to lose and go home without a medal.

“We saw Cheavon [Clarke] when he lost; he was crying and we said to each other, we can’t let that happen. We wanted medals,” said Whittaker.

“This man,” said Clarke grabbing the mic and pointing at Ben. “He did all this with one arm. One arm, with two he would have been Olympic champion.” Medical stories and Olympic glories, such tales; they are not excuses at the Olympics, just part of the story.

“I lost and it is not nice to talk about,” said Artingstall. “I’m not going to argue, she went on and won gold.” The finer details reveal that if one judge had scored just one round different, then Karriss would have been in the final. And, she would have won that. Those are margins that make a fighter, not break a fighter.

Lauren Price was regal in Cannock and you don’t get to say that too often. She went over her semi-final with Nouchka Fontijn in graphic detail.

“You never know how it’s going to go with her,” said Price. “It’s always dirty. I lost a point. She makes it dirty. I had to stay away, I had to box and use my feet.” She did, she reached the final, but the real final was Fontijn; it was tight, a hard one and that is how you should win Olympic gold.
And then there was Galal’s run of fights, a sequence of brilliance, five individual classics, each one fought like it would be his last one. Big Fraze was the closest witness and his version is the one I prefer.

“Every day the coaches went through the tactics with him,” Clarke said. “I shared a room with him and every night before we went to sleep, I would ask him: ‘What are you going to do?’ And he would say: ‘I’m going out to knock him out, I saw him in the hallway and he was looking at me.’ It made no difference what anybody said.”

“What Galal did in the semi-final was incredible,” continued Clarke. “He went in with a Kazakh, he went toe-to-toe and he won. It was the fight of the tournament and then he was in final. I was screaming, crying – so emotional, unbelievable. You win with them, you lose with them, you cry with them.”

Galal had no defence against the claims: “He gave me a funny look,” he started to explain.

“They all gave you a funny look,” Ben countered. “It is strange, you see your opponents all the time.”

Galal continued: “I never forgot that look. I had sparred with him before in Sheffield. Richie, you were in my corner. I knew I could win.” That’s a private piece of backstory, one reason Richie got so much out of the five.

“We were all in one room,” continued Clarke, offering a darker insight into the motivation of a close team. “Me and Ben had our medals and Galal was fighting for a medal. If he’d lost, he was not coming back to the room. He knew that. Ben had already broken Galal’s bed, so he was sleeping on a mattress on the floor, but if he lost, he was sleeping on the street.”

“Fraze, man, don’t worry, I’m going to get you a good slot on my undercard,” Galal added.

“You see,” continued Clarke. “This journey is not over and we will all go on it together.” I’m in, thanks.