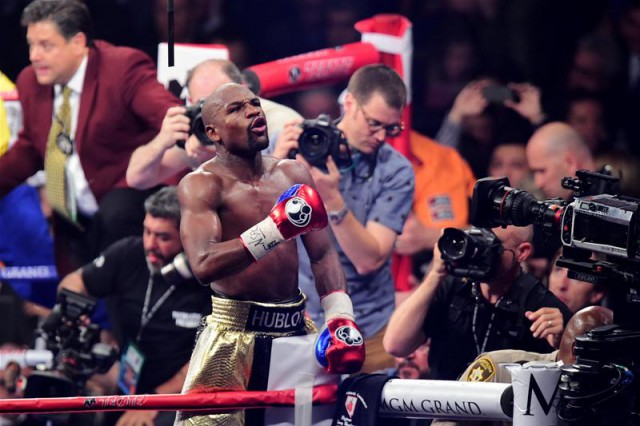 WHETHER we like it or not, Floyd Mayweather will meet Andre Berto in his 49th fight on September 12. But let’s play fantasy promoter for a moment and consider five potential foes who would likely help to generate a bigger pay-per-view buyrate opposite Mayweather.

We know it won’t happen but I don’t for a second buy the contention it cannot happen. The best offensive fighter in the world is setting ticket-selling records for MSG and says he can make 154lbs for Floyd. Yes, he’s on HBO and Mayweather on Showtime but so were Floyd and Manny Pacquiao.

I almost omitted the Bolton man simply because there are already far too many articles out there hyping his credentials and I do not approve of his waiting for this contest for so long. But Khan is a known name in the US, UK and Asia and is on a good run of form.

He was exposed to an extent against Kell Brook but Porter is rough, tough and durable. He has great mental strength and, crucially, is coming off a victory over the Lidl Mayweather, Adrien Broner, that was widely covered.

The rising star of the welterweight division is making headlines on free TV and is young, athletic and powerful. He is not proven at the highest level but, unlike Berto, Thurman has yet to be defeated.

Okay so this is deeply into the realms of fantasy now – Floyd is surely aware that fighting a lady – even the world’s most dangerous – is wrong. But just imagine he were willing to take on a renowned UFC striker in say a three-round exhibition-style match. Highly unlikely, but the recent ‘beef’ between him and both Rousey and McGregor would set the cash tills ringing for weeks.