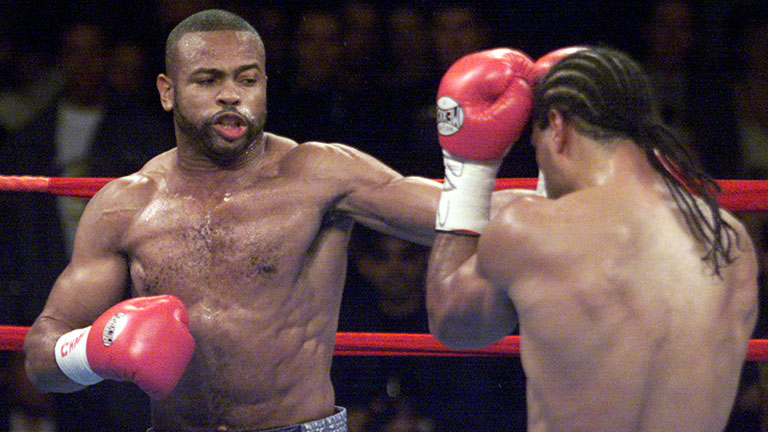 RICHIE WOODHALL lost to all-time great Roy Jones as he won a bronze medal at the 1988 Olympic Games. The two were reunited at a recent event.

“We had a good chat. It’s a bit strange because he doesn’t seem to have changed much. But it was nice to speak to him. He remembers the bout I had with him, which was nice and he said I gave him his hardest fight at the Olympics, which was great to hear because obviously he lost [the decision] in the final. He said, ‘I won the final quite easily. But against you I really found it difficult. You were very, very awkward and I couldn’t get to you,’” Richie told Boxing News.

“I haven’t watched the bout for about 25 years. I can’t remember it a lot now,” he recalled. “He was an unknown American at the time, he had a really good tournament. I remember my coach Kevin Hickey saying this kid’s very, very fast. Typical American style, relaxed and loose, very fast hands. You’re going to have to use your feet in and out with him. You can’t afford to fall short because he’s a very good counter-puncher. So we knew what we were up against. But you just don’t realise until you actually get in there just how fast he is. So he was very, very quick indeed.”

“My coach was quite right, I couldn’t afford to fall short. I did occasionally and he came back with some very fast counters. I think I upped my game in the second round,” Woodhall continued. “He had a good first round, I had a good second round, then he probably just went up another gear in the third and I just couldn’t cope. He used to set traps… The more frustrated you get, the more you come over your front foot and you start making mistakes.

“I tried to box like he did, the in and out game, but I just wasn’t good enough and he beat me to it.”

As a professional Woodhall won the WBC super-middleweight world title and in Joe Calzaghe fought another all-time great. “I didn’t hit hard enough to trouble him. That was my problem. There were times when I did catch him with some good shots when he made a mistake, because I was a good counter-puncher myself but I didn’t have the power to trouble him and if you haven’t got that power, at that level, then you’re not going to beat a guy like Calzaghe because you can’t keep him off. He eventually got to me,” Richie said.

He revealed, “What special fighters have in common, more than anything I think, especially Calzaghe and Roy Jones, Roy Jones more than anyone I think, they have a natural ability not to get hit. The way they box. If you look at Roy Jones, up to a certain stage in his career (I think he went on too long), up until flipping light-heavyweight he hardly got hit. He didn’t. Fights against James Toney and Bernard Hopkins at the time, the guy didn’t get hit – it was very rare for him to catch a clean shot. Now I think that’s a natural instinct, a natural ability. Calzaghe was similar. Calzaghe was a hard geezer to nail with a good shot I thought.”

That what the greatest have in common – “they’ve got the natural ability to avoid a punch”.