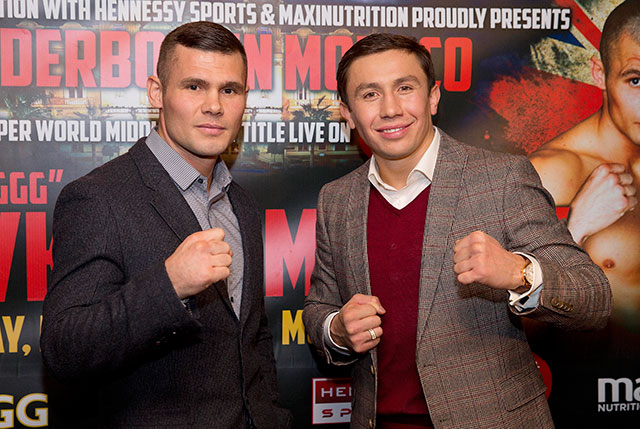 BIG fight this weekend sees Martin Murray of St Helens take on Kazakh terror Gennady Golovkin for three middleweight belts in Monte Carlo, with Channel Five providing a rare (and extremely welcome) free-to-air broadcast for the British public. Golovkin’s power and skill make him a strong favourite, but Murray is a big middleweight who seemingly has a better chance of springing an upset than many of the champion’s previous opponents.

Boxing in Monte Carlo won’t faze Murray, who has fought his last two bouts there – a points win over Max Bursak in June 2014 and then a seven-round technical decision over Domenico Spada four months later. The St Helens man will have plenty of fans there to cheer him on and he doesn’t have to worry about getting over jetlag or anything like that. This is about as a close to a “home” fight as Martin could get, short of actually boxing in the UK.

Of course, boxing will always come down to getting in the ring and exchanging punches, and whatever happens against Golovkin, Murray will hope to fare better than the first British middleweight to figure in a big fight in Monte Carlo – Jim Sullivan. Consult the record books and you will see that the first European title bout listed at 160lbs was on February 29, 1912 (a leap year, thus the extra day in that month). It took place at the Espace Radziwill in Monte Carlo and saw Sullivan tackle a young Frenchman named Georges Carpentier.

Carpentier was only 18 years and one month old, yet already a star in France, having won the European welterweight crown the year before. Bermondsey’s Sullivan had become British champ with a win over Tom Thomas in 1910, although a ninth-round KO by American Billy Papke in 1911 put his world ambitions into perspective. At 25, and a natural middleweight, he must have fancied his chances against the French kid who was rapidly moving through the weight divisions.

Instead, Carpentier showed he was something special by knocking out poor Jim in just two rounds (of 20 scheduled). He would go on to become a hero in his homeland, winning the world light-heavy title and even challenging Jack Dempsey for the world heavyweight crown. Sullivan? He boxed on until 1920 but would never again win a major title fight.

The shortness of Carpentier-Sullivan created a problem for Boxing News, who had bravely sent a man to cover events from ringside (a big adventure in those days before commercial air travel). The following week’s BN thus contained an in-depth special report detailing practically everything that moved in Monte Carlo before, during and after the promotion – you have to fill the paper somehow!