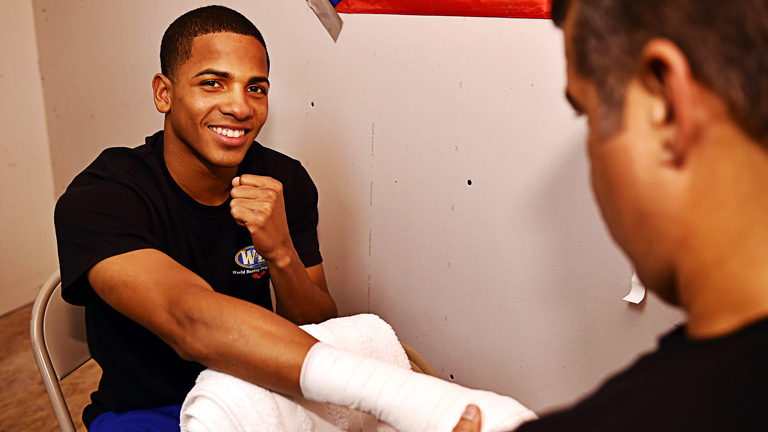 Fast-rising lightweight contender Felix Verdejo checked out of the hospital where he spent the last six days being treated for injuries suffered during a motorcycle accident last Sunday in Rio Grande, Puerto Rico.

The WBO’s number one ranked contender at 135 pounds was cut, battered and bruised but, thankfully, suffered no grave injuries that will impede his life and career in the long run, according to Top Rank representative Gardy Lopez.

“I have definitely learned a big lesson. I’m not perfect. I’ll keep growing as a person and today I’m more committed than ever with my people and my career,” said Verdejo in an official release from his promoter.

“I want to thank Puerto Rico and all the boxing fans for all the messages of support during this difficult time, for worrying about me and for putting me in your prayers,” he continued. “Thanks to God, I’m ready to keep on fighting, with scars that will make me remember this learning experience. I feel more mature, focused and anxious to bring to my Island the happiness of a world title,” finalized saying Verdejo.

What happens next with his career is now uncertain. Earlier in the month, the WBO ordered negotiations for a fight between light weight champion Terry Flanagan and Verdejo and it was reported that the clash was likely heading to Las Vegas to serve as co-feature to Manny Pacquiao and Jessie Vargas’ November 5th event.

The Verdejo side has not offered a timeline for his return as the fighter will take all of the time necessary to full recover before announcing his comeback. This leaves Flanagan searching for a fall opponent and a unification bout with WBC Champion Dejan Zlaticanin is being floated as a possibility.

For Verdejo, his focus now lies on finding an upswing and recovering from an experience that could have cost him his life, his family a loved one, and the people of Puerto Rico the potential opportunity to see another one of their native sons reach the pinnacle of the sport of boxing.

“A painfull and costly accident that will hopefully provide Felix and all young athletes life long lasting lessons,” said Carl Moretti, VP of Top Rank. “We sincerely appreciate the support & love he has received from his island and the boxing community.”