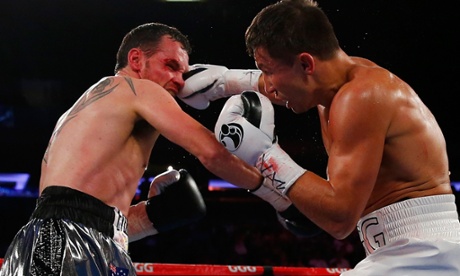 GENNADY GOLOVKIN again showed why he’s one of the most feared fighters on the planet when he crushed the usually sturdy Daniel Geale inside three rounds.

The Australian’s bid for the WBA middleweight strap looked doomed from the opening round, as he was cut before being decked in the second. Golovkin mercifully curtailed the slaughter at New York’s Madison Square Garden with a booming right hand in round three.

Following the thrashing Golovkin outlined his plans for middleweight dominance.

“My focus is at 160 right now. I want a unification fight,” Golovkin said. “For me, it’s very important, who’s the best in the middleweight division? Who are the champions right now? A lot of champions. Miguel Cotto, Peter Quillin, Sam Soliman. Guys, you need show? You need amazing show? Just call me. I’ll stay here. I’m ready for everybody.”

A war with Puerto Rican veteran Cotto, regarded as the real world champion after an upset June win over Sergio Martinez, appeals the most.

READ THE RINGSIDE REPORT, WITH BIG FIGHT ANALYSIS, IN BOXING NEWS ON TUESDAY